Today’s meditation was ten minutes long and was focused upon pain reduction through pranayama (breathing exercises). Honestly? I was having a bit of an anxious morning to begin with, as my family doctor’s phone was on the fritz and when I tried to call there was a “this line is no longer in service”.  It gave me a serious “oh fuck” moment as I worried if I was going to be able to get my refills.  (It’s all sorted now. I ran down there and talked to the receptionist in person. Apparently they’re having “phone problems”.)

Today’s draw is the Two of Swords, which is traditionally a representation of struggling with a difficult choice and weighing your options in an effort to come to a decision.  It can also indicate an avoidance of making a choice, as is demonstrated by the blindfold.

Okay so… I didn’t see the significance of this when I pulled the card this morning.  I didn’t even guess that the fact that the rock the woman is sitting on looks like a toilet would be a warning of what was to come today.   Totally missed that message until it was too late.

And then… I look closer and realize that it actually is a toilet.  Jesus christ I really wasn’t paying attention this morning.

Okay, really tho.   Today’s message is about making good choices.  I made a really bad choice today and the card gave me a very literal warning that I completely missed until it was too late.   It’s all about the good choices.

#TarotForGrowthAugust Challenge Prompt
Topic: I’m plagued by anxiety.
Question: Why have I struggled to hear anxiety’s messages in the past?

Reading Summary: Because the newness of it (Ace of Swords) has blinded me (Eight of Swords) and causes a need to regroup (Four of Swords).  This then smothers out the light (The Sun) by muffling my motivation (Knave of Wands Rx).

Take Away:  When a spike of anxiety happens, it feels like it’s coming out of the blue.  It’s painful and so “new” feeling that it leaves me stumbling blindly, as if reeling from a blow.  Because I react in this way, I then need recovery afterward, which steals away motivation and muffles out opportunities for more positive experiences.

DECK USED:  TAROT OF WHY 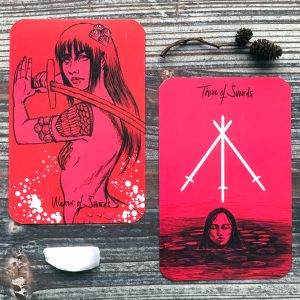 Use Care – Warrior of Swords – Use care both in your ambition but also in your comebacks. When you quip, sometimes it can be taken as more cutting than you intend it to be. Make sure that you are not getting so focused on your ambitions that you lose track of everything else around you.

Be Carefree – Three of Swords – You worry too much.  You spend too much time focusing on the negative and viewing the world through a pessimistic lens.  Stop closing your eyes to all of the good that surrounds you and work at being more carefree in enjoying things from a more positive and optimistic viewpoint

Lionharts #TheAugustTarot#ElementalChallenge
Question: Water, when I am ready to release and flow, what should I know?

Reading Summary: There are always going to be others that care about me (Two of Hearts) and have the same vision as I do to help me along the way in my endeavors (Three of Diamonds).  Make sure that you aren’t leaving these people behind in your effort to find something better (Six of Spades).

Take Away:  “Release and Flow” is such a foreign concept to me. But the advice here makes sense.  If “release and flow” means going with the flow to move on from something crappy into a better situation, then it’s important not to leave those behind that are your support system and have a piece of your heart in their hands.  They should be along with you for the ride.

Reading Summary: Diving into creative endeavors and passionate goals (Knight of Wands). Knowing when to cut and run (Six of Swords)… and when to stay and fight (Five of Swords).

Take Away:  Sometimes a gift can also be a curse, and the first part of the answer for this question is definitely one of those.  The gift of being able to hone in on my focus and plow into my intent, to go after what I want with single minded determination is both a gift… and a curse.  Because when you have that kind of focus, and that kind of drive?  Sometimes you forget about all the other important things that need to be tended to as well.

The second gift is the ability to know when it’s time to walk away, and when it’s time to stay and fight.  When I walk away, I do so for good reason.  It’s for my own health and well-being, and I rarely look back on these decisions.  On the other side of this coin, when I dig in my heels and decide to stay and fight for something I believe in, I become relentless in that and the determination and conviction I bring with me into these situations more often than not turns the table to my benefit.

One thought on “Pay Closer Attention”