Today’s meditation was just over ten minutes long and I finally managed to actually get in a meditation uninterrupted.  Well, other than by Miss Luna coming to join me. I don’t consider that an interruption, though. 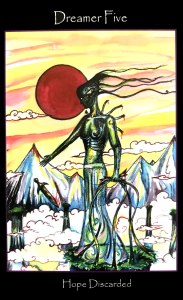 Today’s draw is the Dreamer Five (Five of Swords) which is traditionally an interpretation of the dynamic between triumph and defeat.  That is to say, that it can at times represent triumph over adversity and taking the “spoils of war” for oneself, but can just as easily represent being on the other end of that battle and its results.

What stands out to me in this card is something that I’ve noticed in a number of the cards in this deck in the past.  That is to say, that the interpretations in the key words and in the imagery depicts a more “reversed” interpretation of some of the cards.

Here in this image, a Fae cuts off its own wings, which trail from his fist while they still hold the bloody knife in the other hand.  They have lost whatever battle against themselves was raging within them, and sacrificed their wings in the depths of their defeat.

Today’s card is a reminder not to “throw the baby out with the bathwater”.   Yes, sometimes shit happens.  Sometimes it feels like it’s time to give up, or like you’ve reached the end of your rope.  But don’t just blindly accept that everything is lost without actually taking score and really paying attention to what is left… and the potential that lies beyond that moment.

DECK USED:  TAROT OF THE SIDHE

#TarotForGrowthAugust Challenge Prompt
Topic: I’m plagued by anxiety.
Question: How can I heal my relationship with anxiety? 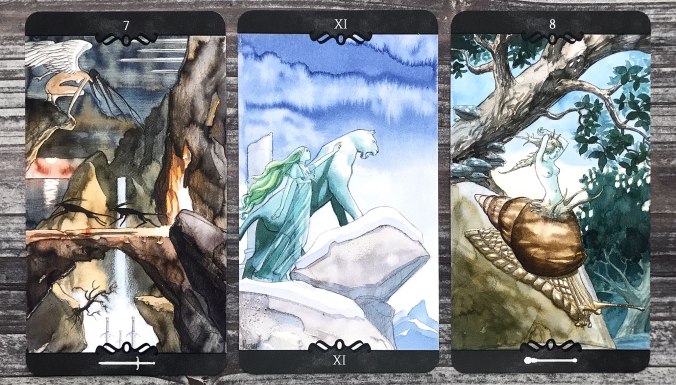 Reading Summary:  Be mindful of when anxiety is stealing away my time (Seven of Swords and lean on my inner strengths (Strength) and those things that need to be done to bypass the anxiety reaction and leave it in the dust (Eight of Wands).

Side Note:  I forgot how much I love this deck. I really need to pull it out more often.

Take Away:  This is about awareness and distraction.  It’s important to stay in touch with my anxiety levels and be aware of when they spike. Then, use distraction tactics combined with my ability to “stand strong in the storm” to get myself through those anxiety moments and out the other side unscathed. 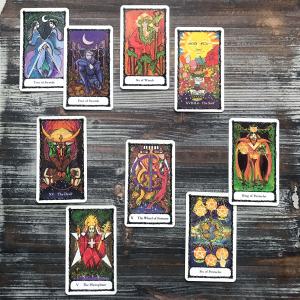 There was once a husband that was positive being single would be better than being married (Two of Swords) and insisted on taking a break from his marriage (Four of Swords).  His friends praised this decision and gave him many pats on the back for having claimed his independence (Six of Wands), and for a while he was very happy and had a lot of fun (The Sun).

Soon, that fun wasn’t enough, though, and he wanted more. He upped the stakes on those things he enjoyed again and again, each time he became bored, he sought out even better experiences and more enjoyment than he had before. (The Devil)

Reckoning came when he ended up losing everything (The Wheel of Fortune).  The rose colored glasses were ripped from his eyes and he saw what a mess he’d made.  He realized he was chasing a dream, and was fortunate to be wise enough to learn from his mistakes instead of repeating them (The Hierophant).

He reached out to his estranged wife and apologized, offering not just his apologies but sincere words about how very much she means to him and how much life sucked without her (Six of Pentacles).  Although they agreed that he had a lot to make up for, in the end she decided to take him back and he happily slipped back into the role of being king of the castle once more (King of Pentacles).

Lionharts #TheAugustTarot#ElementalChallenge
Question: In what way can the element of Water help me right now? 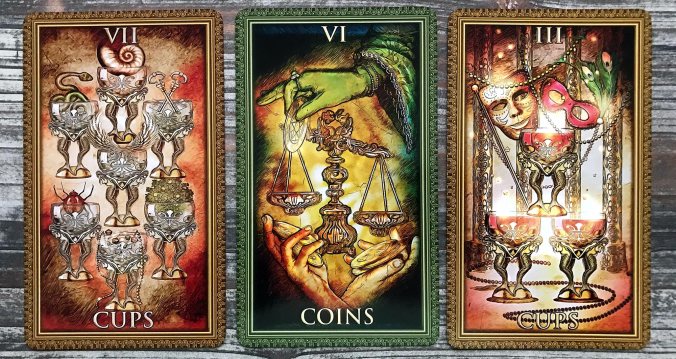 Reading Summary: Allowing my heart and my intuition to have a say in decisions (Seven of Cups) concerning where to be generous with my resources (Six of Coins) and with my time (Three of Cups).

Take Away:  I often feel the need to offer resources and/or time to different needy causes. When I logic my way through it, I talk my way out of it… which in one way protects my own interests, but it leaves me feeling a bit guilty, to be honest.  The cards here indicate that the elemental energies of water can help me in making good choices that produce a less guilt-ridden results.

#ConnectWithYourDeckChallenge by E Roebuck-Jones
Question: What do I love about my world? 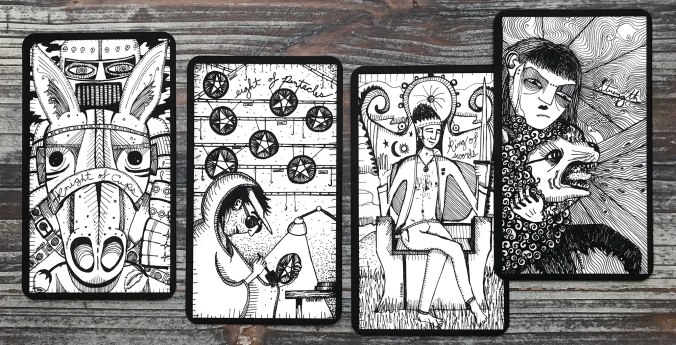 Reading Summary: I have someone to help guide me forward on my emotional growth and in learning how to give my emotions freedom (Knight of Cups). I’m good at what I do (Eight of Pentacles) and I know where my strengths lie (King of Swords and Strength).

Take Away:  I was a little confused at first with these cards, until I realized that the question is asking about my world… not the world.  The things in my world that make me happy and that I love include Gideon and his guiding hand in the emotional side of my life.  I love that I’m skilled at what I do and have found a way to make the things I enjoy more than just hobbies.  I also love how well set I am in knowing who I am and how I tick, what things are right for me… and how to say no to the things that aren’t. 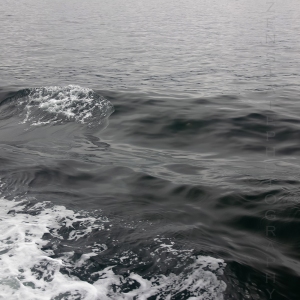 slides into calm
with a touch
waves
become mere ripples
you are the one
that makes the froth
of agitation
settle.
You are my calm
my balance
that tames the chaos.

Thank you for loving me.

The prompt for this reading came from one of my Discord servers and is as follows:
“I’m working my way through The Witching Way Of Hollow Hill and it’s amazing– so this week’s divination prompt is based off of where I’m at in that book. Please note that I’m not advocating for any one spiritual framework here– substitute in whatever words work best for you! Chat with your divination tools this week about connection and clarity.” 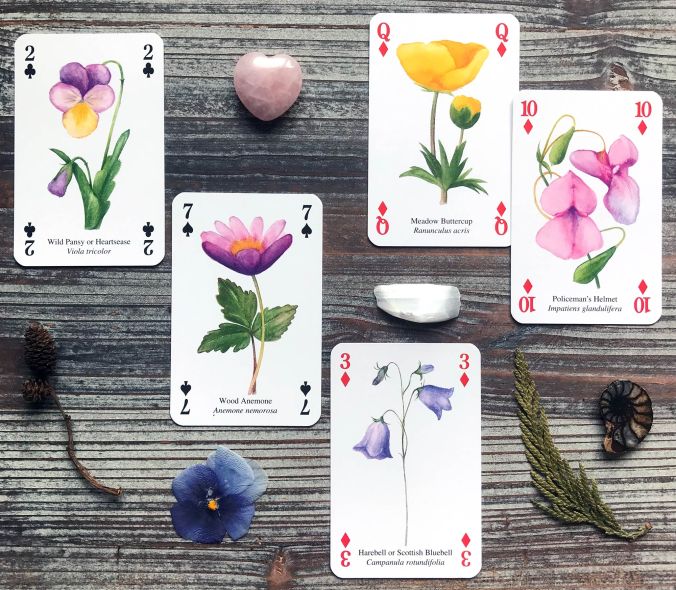 In what ways do I experience connection and clarity within my spiritual reality?
Two of Clubs – Heartsease

The Wild Pansy is a gentle flower filled with love and luck. Combined with the Two of Clubs, it indicates that the ways in which I connect with my spiritual reality and find clarity there is through a sense of duality and direction upon my path.  By being aware of all of the options open to me and allowing my intuition to be my guide in this area, my path is always clearly stretched out before me, and there is no hesitation or confusion concerning if I’m headed in the right direction.

In what ways do I close myself off from, or am unaware of, that reality?
Seven of Spades – Wood Anemone

Wood Anemone is a flower of the duality between anticipation and relaxation.  In this card it is combined with the Seven of Spades, which indicates that I spend too much time pushing forward instead of meandering upon my chosen path and enjoying the journey.  This constant push steals away both my enjoyment of the journey and my anticipation of what each new step might bring, as long as the easy relaxation that such a journey could… and perhaps should include.

How should I go about becoming aware of that reality?
Three of Diamonds – Harebell

The Scottish Bluebell holds within it the qualities of humility and constancy, and is strongly associated with glen sprites and forest Fae.  Here, it is combined with the Three of Diamonds, which speaks of coming together in harmonious collaboration to reach a goal.  The suggestion here is to open myself up to working with others, and the use of the Harebell in this instance leads me to understand that those “others” are in reference to my spirit guides.

Is this a good time to go looking for greater spiritual connection?
Queen of Diamonds – Meadow Buttercup

The Meadow Buttercup is a flower filled with youthful energy and enthusiasm.  Combined as it is with the Queen of Diamonds, there is an encouragement here to seek out the earth and her nurturing embrace and allow her to renew my sense of optimism.  Be open to allowing a shift in view, and let the sunshine in.  It is a very good time to seek out that deeper connection.

Or should I focus on the mundane for right now?
Ten of Diamonds – Policeman’s Helmet

One of the strongest qualities of the Policeman’s Helmet is the energy of impatience that it possesses.  The Ten of Diamonds blends this meaning into a desire for stability and fulfillment through security.  It tells me that I am already focusing on the mundane more than enough at this time, and pushing more in this area is simply an expression of impatience that will get me nowhere.  These mundane goals I desire to accomplish are not easily or quickly gained.  Enjoy the path… don’t rush.

Not All “New” Ideas Are Good Ideas