These Saturday readings are (not usually) bearing in on any one thing or event in my life, as the question used is asking for a more general outlook. This is a self care exercise, and is not meant as a predictive reading… although that, too, happens on occasion.

The question is… What do I need to focus for self-care through the week ahead?

Earth – Temperance and Letting Go – You need to make sure that you’re letting go of your responsibilities this week and just being in the now. Get in contact with your spirituality and use this time to find your center. Don’t allow stress concerning your responsibilities set you off-balance.

Air – Ten of Wands, Inspired, Balance – There’s going to be lots of brilliant ideas this week, and lots of ideas on what you should be doing with this time, but you need to remember that this week is meant to be a time of rest in order to restore balance. Write down your ideas and set them aside so that they don’t overwhelm you.

Water – The World and Awakening – Focus your emotional energy upon what makes you feel complete. This means spending time with Gideon, but it also means making sure that you’re doing the things that nurture your soul in other ways as well. Allow this week off, combined with letting go of responsibility, to give your emotions room to stretch and grow.

Fire – Nine of Thunder atop Flower of Stones, Secrets – This week your passions should be focused upon self-care and making sure that you’re getting the recovery time and relaxation that you need, not on work on the business. Don’t sneak around doing business shit when you shouldn’t be doing any of it at all right now.

Waning – Camel (Fortitude) – Now is not the time to push through and force yourself to go the extra mile.  Take your time off for what it is, time off.  Not time to catch up on other shit or get things done you have put off for “when it’s more convenient”.

Waxing – Dove (Open Heart) – Be open and receptive this week.  You don’t have to guard yourself so harshly or keep everyone at arms length.  Relax your guard a bit and trust Gideon and others to take up the slack in this area while you are giving yourself a bit of a break.

Take Away – Rest and recovery is the theme of the week this week. This includes not sneaking about doing work when no one is looking.  You need to allow this week to be about you and taking care of yourself.  Give your body, mind, and emotions the rest that they need.

Today’s meditation was skipped cuz I burrowed into the pillow and got myself some extra sleep instead.  I was feeling a bit more tired than normal today, which I’m blaming on the vaccine although, chances are?  It’s just because my body heard the news that I’m taking a few days off.

Today’s draw is the Sun card, which is traditionally a representation of happiness and joy, success, fun, and taking pleasure in the little things.  In the tarot, the Sun card is the awakening to light’s reassurance after the confusion and uncertainty found in the Moon card.

When combined with the Flower Fortune card that was pulled for today, which says “The land is always on the mind of a flying bird”, the message that I see being conveyed in these cards today is about being  happy with where you are and what you have.

The grass is not always greener on the other side of the fence. It’s important to foster happiness in the now, instead of waiting for it to come later on.   Don’t put off your happiness for when it is more convenient or for when the time “feels right”.  Bask in the happiness you have now, enjoy it, and don’t take it for granted. 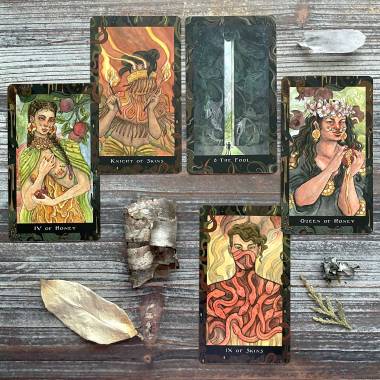 What role does happiness play in my life?
Four of Honey atop Knight of Skins

For me, happiness is the blend of fiery passion and the security of a stable future. These are the two halves of my life where happiness lives and grows. One lives in comfort, the other in pursuing my passions. Although they appear to be on either ends of a spectrum, for me they are in fact two sides of the same coin.

How can I better enhance happiness in my life?
Queen of Honey atop Nine of Skins

Don’t allow yourself to become distracted or quit along the way.  You need to stay strong, and to stay strong you need to take care of yourself.  You can manifest anything you want in  your life, but only if you are well enough to do so.   Self care isn’t selfish. You can’t help others out of the mud without sure footing first, and you can’t manifest more happiness in your life without ensuring you are well and taking care of yourself.

The Appearance of the Fool as a Bridge

The Fool card is the bridge that connects the role happiness plays in my life with how to better enhance that happiness.  This card is the connection between the “what is” and the “how to get more of this”.  It speaks of stepping forward into life with eagerness, anticipation, and a sense of wonder, and taking each day as it comes with this mentality at the helm.

The fledgling goddess had much she wanted to share with the world, but was blind to the fact that she was not yet ready. She desired adulation and veneration, and was unwilling to wait and take her time learning all of the lessons still before her yet to be discovered.

But she was unable to keep her desire for that veneration from controlling her, and as time went on she found that it was not she that controlled the people, but the people that controlled her.  For she could not do without their love and adoration, she had a deep seated need for their attention and veneration.   Having jumped forth untrained, she did not take time to learn the balance needed, and thus she became a slave to her needs, instead of her people becoming a slave to her wishes.

I deleted eighteen of my Kickstarter pledges today.  Weeded through them all and decided that some of them just weren’t enough of what I wanted to keep the pledges.  A good number of them were playing card decks. I’m going to start vetting these far more stringently than I have previously.  Being disappointed by the Leaves decks (and Cybershock decks before that) made it clear that I need to be more watchful of the playing card campaigns. 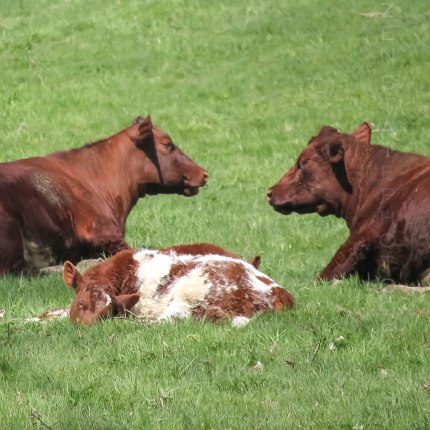