Today’s meditation was just over ten minutes long and was relatively uneventful and quiet.  Which is honestly a little surprising because that never seems to happen anymore.  The fire alarm decided to wait until after I’d gotten through my meditation to go off tho, so that was nice at least.

And yes, everything is fine.  It looks like someone was trying to break into the storage room and a buddy of theirs went and pulled the fire alarm to work as a distraction to give them time without interruption.    They didn’t get in so… yeah. 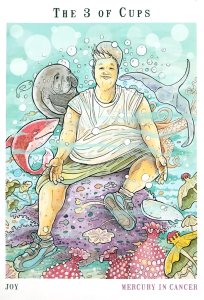 Today’s draw is the Three of Cups, which is traditionally interpreted as a “joyous joining” of friends whether in celebration, or collaboration, or just in friendship on its own.

Honestly? I’m not sure how I feel about the pink smiling shark.  I find it really distracting in the imagery of this card, and so I suppose I should consider it as the message.  The fact is, though? It’s just weird.

That said?  I can work with that.   It stands out…. so lets go with the shark.  The shark in this card appears among others and does not show its teeth.  Instead it is a shade of friendly pink and sports a smile.  This actually hearkens back to something I was thinking about in the shower yesterday. I had a client recently that insisted that they were unlovable and would never find a partner.  They were very upset and I refused to do a reading for them on that day. Instead, I told them I had something for them to think about.   I told them that even some of the shittiest people in the world that have people that love them.  Assholes and abusers, haters and closed minded bigots.  These horrible people managed to find someone to love them, so someone like him that isn’t horrible? Has not just as much of a chance of finding someone, but even more of a chance at it.

The shark clearly has friends in this imagery even though it’s a predator swimming among creatures he considers food.  Instead the shark gets along with them, makes friends with them.   So too can those that feel they are unlikable or unlovable find friendships and love.

The message in this card is that no one is unlovable.  No one is unlikable. We just feel that way sometimes.

And can I just say?  Sometimes at the end of the month I’m not ready to move on to different decks and wish for more time with the ones I’ve worked with for the month… but this month?  I’m so ready to move on from this deck and the Tarot of the Sidhe.  I can’t wait for the decks that come up for these pulls starting tomorrow.

#TarotForGrowthAugust Challenge Prompt
Topic: I’m struggling to move past trauma.
Question: What’s the next actionable step I can take to move forward down the path of healing? 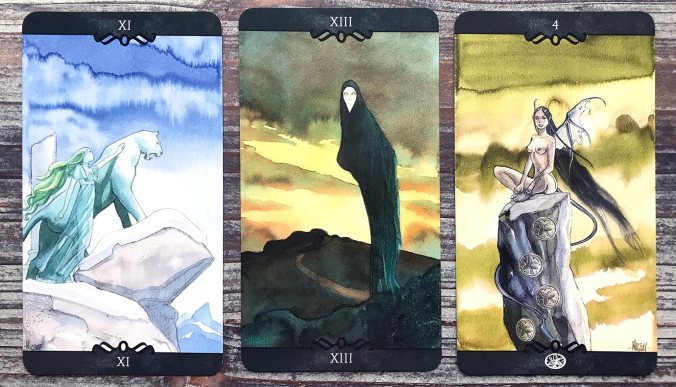 Reading Summary: Stay strong (Strength) in the face of change (Death)… your foundation might feel precarious but it is sturdy and will be okay (Four of Pentacles).

Take Away:  It’s about perseverance. Sometimes actionable steps are not actions at all, but more about being aware and standing strong.  Change is a part of life and sometimes those changes that happen can feel like the end of the world.  The cards here are a reminder that it isn’t the end of the world.  It isn’t all going to fall apart.  Your foundation and will continue to stay solid and strong. 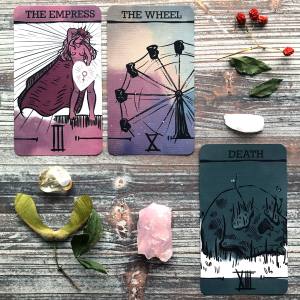 Late at night in the deep deepest darkest hours before twilight, the green lady with the crown puts down her torch and her book, and pulls on her cape (The Empress). She goes to visit Coney Island to ride the Wonder Wheel and enjoy all that Luna Park has to offer (Wheel of Fortune). Soon, she will have to return to her place watching over the city, and pick up her torch and her book once more for another day (Death).

Lionharts #TheAugustTarot #ElementalChallenge
Question: How can I best support and nurture myself and my personal growth at this time? 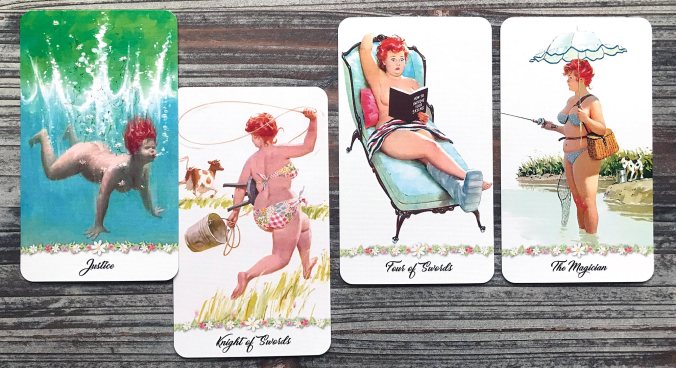 Reading Summary: Accept that sometimes shit happens (Justice) and you’ll have to make the best of it (Knight of Swords). Take those moments to rest and recuperate (Four of Swords) so that she can be ready for the next challenge (The Magician).

Take Away:  The advice here to help me in nurturing myself and fostering my personal growth is that I need to not let the little unexpected surprises in life trip me up so much.  Hurdles happen and just like tripping over a root on a trail in the woods, you have to pick your ass up and keep going because no one is going to come for you if you sit there and whine about it to the trees.

#ConnectWithYourDeckChallenge by E Roebuck-Jones
Question: How would I feel if I was more mindful right now? 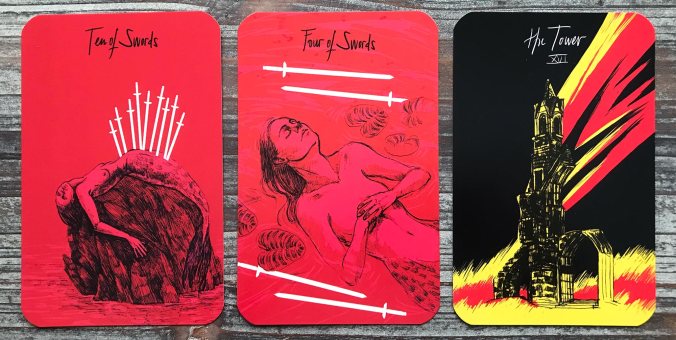 Reading Summary:  Hol-eee-shit.  *Eyes the cards.* Okay so if I was more mindful right now I’d be feeling a good deal more defeated (Ten of Swords) and in need of rest and retreat because the world (Four of Swords) would feel like everything is falling apart (The Tower).

Take Away:  The lesson here is that mindfulness is not always your friend. Sometimes you have to be a bit oblivious and obtuse just to get through the day.

One thought on “Everyone Is Lovable To Someone”