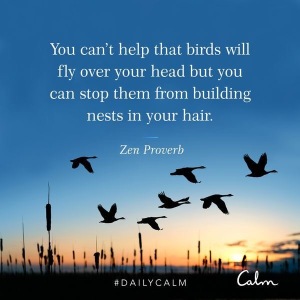 Today’s meditation was a little over ten minutes long, and I chose to go with a guided meditation today.  The topic of the meditation was a guidance on one of the methods used to deal with invasive thoughts during your meditation practice.   I think that the quote in the graphic to the right covers that really well.  The method involves opting to acknowledge the thoughts that intrude rather than trying to push them away.   Instead, you recognize that you were thinking, and what it was about… but you don’t allow it to suck you into a dialogue.  Instead, you identify the rabbit hole as a rabbit hole and step over it. 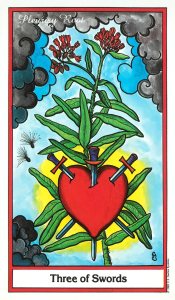 Today’s draw is the Three of Swords, which is traditionally a representation of themes that have to do with disappointment, heartbreak, grief, and other forms of emotional hurt.

I used to feel that the Sword suit was a strange place for this card, as the Swords are supposed to be about thought, intellect, and communication. But, over time I’ve come to understand that it is not the heart or the emotions that spur these feelings represented in the card. Instead, it is the mind that spur these feelings… and the heart that then feels them.   Since the feelings are spawned from the mind, it then makes sense to me that they are in the Sword suit.

What stands out to me the strongest in the imagery of this card today is the two seed pots that are in the process of falling on the left side of the card.  These seed pods speak to me of renewal, while the plant depicted in this card speaks to me of purging.  Asclepias tuberosa (pleurisy root) is an expectorant, diuretic, and diaphoretic.  It very literally forces the body to purge itself of toxins and its spiritual uses are very similar.

Combined with the traditional meaning of the card, the message that I find here today is about letting go.  It’s about releasing the issues and problems, the bad thoughts and negativity.   Let go of the “can’ts” and the “this sucks” and instead embrace that sometimes things are difficult and sometimes they hurt… but that is temporary.   Once you’ve had a moment to wallow in those negative feelings, it’s time to let them go and keep moving.  Take a deep, cleansing breath and reach for a new start.

#TarotForGrowthJune Challenge Prompt
Question: How can I invite more compassionate energy into myself?

Reading Summary: Let go of so much of the juggling (Two of Pentacles Rx). Balance out the feminine and masculine energies that are threaded through your emotions (King of Cups and Queen of Cups). Understand this is just one leg on a long journey (The World).

Take Away: You know, I hadn’t actually considered that there might be a bit of imbalance going on in the emotions I’m trying to become more comfortable with and that may be why I’m struggling with it.   It’s something I need to delve into and look at more closely, but the message from the cards rings true. The message in the Two of Pentacles and the World are not new and something that has been repeated often as a reminder lately, and are things that I am actively working on and keeping in mind. 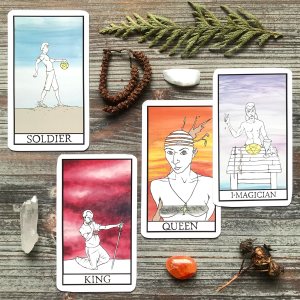 Reading Summary: We move slowly along our path (Knight of Pentacles), making the wisest decisions and judgements that we can along the way (King of Swords), and determined to do the best that we can towards what sparks our passions (Queen of Wands) with the tools we have (Magician).

Take Away: Although I’m not sure that I agree with this answer, the answer in the cards says that no… fate does not exist.  These cards speak of autonomy, personal choice, and control over one’s path and one’s future.  There is nothing in these cards indicating a lack of control, nor direction being placed in the hands of fate.

Side note:  Yes, I covered the nipples on the Queen. These posts on my blog are backed up on Tumblr, which has a very strict “no female nipples” policy.  So I try to make sure I cover the nips when they’re visible just to make sure I don’t get booted off that platform. I think that also may be a policy on IG as well (although I’m not 100% certain on that one).

#TheJuneTarot Challenge by Lionhart
Question: Draw a card and let it serve as a reminder of something good about this very moment. 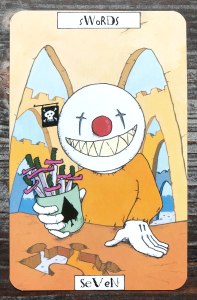 Reading Summary: I’m not the one cleaning the bathrooms. I essentially logic’d my way out of doing the task myself and foisted it off on L.

Take Away: I mean seriously… who the hell wants to clean bathrooms. It’s a miserable experience and it’s something I usually pay others to do for me.  L and Z have essentially put it off on their chore list until it was the last thing, and then tried to skip it to start over on the list.  So, yeah.   I pointed out that the bathrooms needed cleaning and I’d already wiped down the ceilings for them, so they needed to finish it.

So!  We have clean bathrooms!

#ConnectWithYourDeckChallenge by E Roebuck-Jones
Question: How can I live in abundance?

Reading Summary: Make the most of what you have (Queen of Pentacles) and be grateful for it rather than constantly focusing on getting more (Temperance).

Take Away:  Abundance comes in one’s perception and there is no “line” or “enough” to where a line can be drawn to say that you’ve made it.  It’s about finding the things that make you happy and help you feel complete and fulfilled, and appreciating them instead of constantly looking for more.   This is what the cards reflect here.   Find those things in life that make you happy and fulfill you now… and you are already there.

One thought on “Cleansing Breaths”

The World Spins On, Regardless

Transitioning from November to December