Today’s meditation was just over ten minutes long, and I did something a little different today (which I’m surprised my phone cooperated with me and it worked).  Essentially I overlaid my harp meditation with the incremental chimes over-top the guided meditation.  So I got both the guide’s voice doing her guided meditation thing, and the harp in the background, and the occasional charms that tell me when to change positions in my stretch.   It sounds complicated, but it was really great and definitely something I’ll be doing again.

Today’s draw is the Page of Air (Page of Swords) which is traditionally interpreted as a receptive omega energy, personality, or person in the area of one’s thoughts, intellect, logic, and the realm of communication.

What stood out to me the strongest in the imagery of this card today was the swirling of the fish around the central figure.   This swirling reminds me of the confusion that I sometimes go through when my brain has one of it’s “moments”.

This got me to thinking about why sometimes I’ll get in the habit of doing something (like messaging you as soon as I get home from work, for instance) and I’ll do that for a while and then suddenly I just stop. I know this is something that confuses you when it has something to do with how I interact with you specifically. But I want you to know that it’s not just you, and in truth?  I don’t even realize when it happens.  It’s sort of as if my brain goes through some sort of cyclical reshuffling on a periodic basis. At these times, some small things get lost in the shuffle, and then when things re-shuffle again (or you remind me)… they resurface.

I don’t know if this is natural and something that everyone goes through… or if it’s part of the results of the head injury that I experienced when I was younger that still at times screws with my memory. Either way, the fish in today’s card brought this to mind, and I think that the message here isn’t so much a “moral of the story” message as it is an encouragement for me to think about this in general and let it become something I’m more conscious of as a whole, even if I don’t realize it’s happening in the moment.

#TarotForGrowthJuly Challenge Prompt
Topic:  I’m struggling to find my purpose.
Question:  How are fear and shame playing into my refusal to acknowledge my purpose?

Reading Summary: There is a continuation of color in these cards that indicates a building from one card to the next.  In the first card, you have a moose among men and he swings with them without fear of condemnation or reprisal… shameless.   In the center card, the knight stands in the mouth of the monster without fear or either falling or being eaten alive… fearless.  In the last card, the owl eats fruit from its own brain tree, indicating self sufficiency.

Take Away:  I am shameless and fearless in this area. I am centered in my purpose and know my path well as it is the path I chose for myself.

This has always been the case for me, and I honestly have no idea where the confidence to walk my own path came from.  It’s just always been there.  I know what I like and no amount of fear or shame can sway me from it.  I know what’s right for me, whether that’s something I like or some moral dilemma, or the steps taken along my spiritual path or my life path.

I honestly have struggled with the Tarot for Growth questions for the past few days, because struggling to find my purpose is just not something that I personally have an issue with, so the questions that focus upon that issue are really not something I relate well to.

#DiscordTarotholicsJul2020 Challenge Prompt
Question:  What do I need to focus on for self-care for this upcoming full moon? 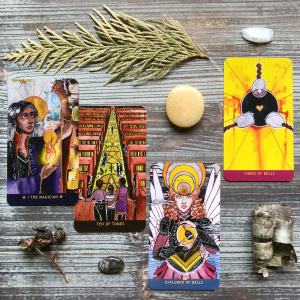 Reading Summary:  Take some time to appreciate all that you’ve accomplished (Ten of Tomes), with extra emphasis placed upon the fact that you have accomplished these things by being the capable and resourceful individual that you are (The Magician).  Use this knowledge to push back against (Explorer of Bells) that inner critic that keeps trying to beat you into submission lately (Three of Bells).

Take Away:  My inner critic is a son of a bitch.  It’s no secret that this is something that I struggle with a lot. It works hard to convince me that nothing I do is ever good enough or ever enough at all. It pushes me forward, driving me to always give my all to every little thing… and the thing is?  It’s not just exhausting, but it’s impossible to give your all to every little thing.  With this upcoming full moon, the cards remind me to not give that inner critic credence, but instead look at all that I have done and how capable these accomplishments prove that I am… no matter what that inner critic says to the contrary. 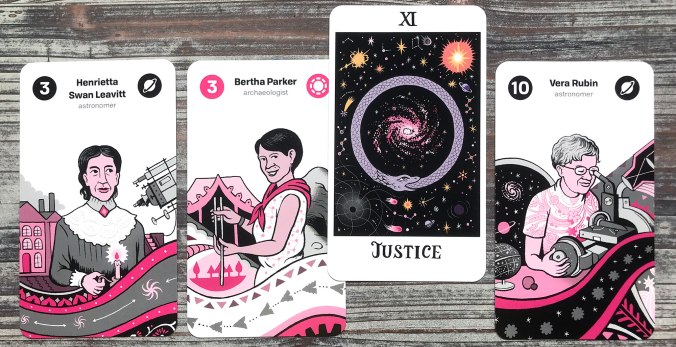 Stop – Three of Astro – Don’t allow your thoughts to pick apart at your inner confidence. It’s important to take what that inner critic says with a grain of salt.

Use Caution – Three of Macro and Justice – Pay attention to what tasks you are farming out to others.  You have exacting standards, and you don’t want to hand out tasks to others that will lower the quality of the end results.

Go – Ten of Astro – As a previous reading I did earlier in the week stated, it’s time to move forward with the transition and growth that I’m going through.  I’ve spent time gathering wool and exploring, but I can’t stay still forever.  It’s time to consciously work on letting go of the old and stepping into the new.

One thought on “Brain Shuffle”

Listening Is More Than Hearing

Transitioning from July to August

Who’s Goals Are Those?

Every Soul Is Unique