Today’s meditation was silent and still.  I spent some time out on the balcony relaxing.  I should’ve taken the camera out there with me, but instead I just spend some time with the flowers and colors.  It was nice because the workers across the street apparently took the day off, which means it was quiet and relaxing.

Today’s draw is the Temperance card, which is traditionally a representation of moderation, patience, and connection between emotions, spirituality, and the earthly plane.

In today’s Temperance card, the element that remains from the traditional imagery is the cups and the flow of liquid from one cup to another, and from there down to the feet of the figure.  This brings to a point that connectivity that is a traditional element in the tarot.

Combined with the Flower Fortune Card for today with the saying “It is in the here and now that we must live”, I see not just a reminder to be present in the moment, but guidance on how to make sure that we remain mindfully focused in the now.

Often in guided mindfulness meditations, they often use a technique where you take a pause to explore each sense and what you perceive through that sense for the space of two full breaths, then move on to the next sense and repeat.  This is a method that can also be used outside of meditation to bring ourselves into the moment when our mind has decided to create chaos through worry, or focus too deeply on the past or future.

The message here is a reminder sometimes what is most needed is to slow down. To release control.  And to take time to just… breathe.

Nine of Swords – If it doesn’t feel right, then don’t do it. Every single time, without fail and without exception, when you do something that doesn’t feel right, you regret it in the end. This isn’t about legal or illegal, nor about social norms.  It’s about what feels right in your gut.  Go against that inner moral compass and intuition, and you’re going to pay the price either with external consequences or with your own conscience eating you up as a result.

Two of Cups atop Queen of Pentacles – Helping and nurturing others is important. Your life feels more complete and more at peace when you allow yourself to connect with others, listen and provide insight and guidance.  That guidance is often natural to you and grounded in nature, and hits others in a very earthy way.  It connects you to them, and builds bonds and friendships as a result.

Six of Cups – Cherish every day.  When you look back on the past, you do not remember the boring or the dredge of day to day. Nor do you accurately remember the bad, for time softens those memories over time.  Instead, it is the good that really sticks and stays accurate in our memories.  This encourages us to make more out of every day, so that there is more good and memorable moments that fill out lives from one day to the next.

#DiscordTarotolicsMay2021 Challenge Prompt
Question: How can you unlock more positivity in your heart and mind? 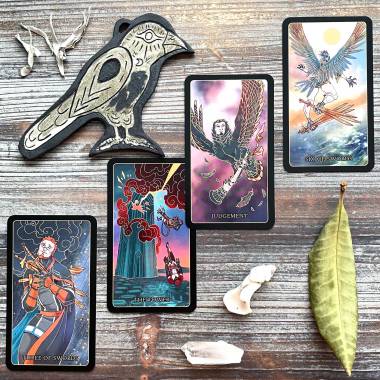 Reading Summary: Don’t judge yourself (Judgement) so harshly (Three of Swords) when something doesn’t work out (The Tower) and you have to move on or start over (Six of Swords).

Take Away: This is about my inner narrative and the fact that I’m so harsh with myself, especially with what I perceive something not so much as a failure, but rather as a fuck up.

Failures are things that we learn from.  Fuck ups are careless and irresponsible bullshit.   The cards here indicate that if I want to unlock more positivity in my heart and mind, I need to be more forgiving with myself and treat those moments in the same manner that I do failures. Not something that I need to be punished for, but rather as lessons to learn from.

I ate eight meals yesterday instead of six.  Which seemed to help quite a bit with my energy levels when it came to getting my packaging done in the 1am-3:30am time slot that I worked at packaging.

One thought on “More Time In The Now”

Finding the Fire Within – Part III

No Need To Rush Forward