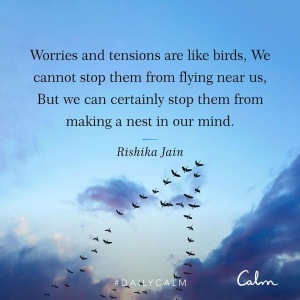 Today’s meditation was just over ten minutes long and was along the same theme as yesterday’s meditation, which is to say that it focused upon finding calm in the storm.

As yesterday’s focused upon where to look within yourself to find a center, this one focused upon how to reject the mental chaos of events and situations that create the opportunity for that chaos to invade and conquer.

The meditation spoke about the importance of regular meditation practice in order to prepare the mind for when these situations arise, so that we are more able to use the tools that meditation helps you develop to stay calm and centered when that is most needed.

Today’s draw is the Four of Brine (Four of Cups) which is traditionally a representation of stability and/or stagnancy in the area of one’s emotions and relationships.  This often translates into themes involving taking time to reassess one’s emotions and/or ignoring outside influences and turning inward towards those emotions.

My interpretation of this card touches upon that theme but is a bit different as well, which is probably not much of a surprise.  What I see in the imagery of this card today is the python changeling accepting the gift of the persimmons from the monkeys in the trees… rather than preying on the monkeys themselves.

This speaks to me of reassessing one’s motives and motivations, and factoring in one’s emotions into that process of reflection. It speaks about finding a better way, and possibly letting others in to allow them to help you in finding that better way of doing things.  The cards indicate I will benefit from allowing others input to assist me in finding a “better way” today.

#TarotForGrowthApril Challenge Prompt
Question: What part of that is within my power to change at this time? (built off yesterday’s cards)

Reading Summary: I need to actually get a plan in place (Ace of Pentacles), even if it’s not actionable until later on.  In this way I can take control of the situation when the opportunity is presented to me (Queen of Wands) and reap the benefits of being ready (Four of Pentacles).

Take Away:  Well there you go. Like with my business, this stagnancy with my physical body is another area where I will benefit from having a plan set in place before restrictions lift. By preparing and having a plan in place, I can then hit the ground running with solid footing when the opportunity is presented, and reap the rewards of that preparedness.

#DiscordTarotholicsApr2020 Challenge Prompt
Question: How can I obtain better clarity in order to move past those obstacles? (built off yesterday’s cards) 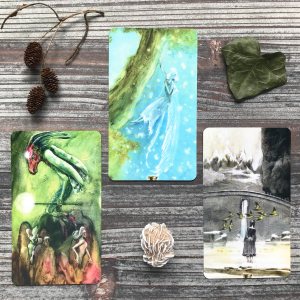 Take Away:  Pessimism is the biggest and most persistent of all my bad habits.  I say that it is a bad habit not because pessimism can’t be healthy, but because it can so easily fall into being unhealthy in my case.   The cards indicate that I need to take time and care in fostering my sense of hope and optimism so that my natural inclination towards pessimism doesn’t take over and pollute everything.

The last card is a reassurance that I often use for myself when going through a depression episode, which is to remind myself that nothing lasts forever.  The things I am struggling with now won’t last forever either.  It is a reminder to look for the light at the end of the tunnel and hold onto that hope and optimism, because even the dark times pass so it’s important to not allow them to drag you down any longer than necessary.

#ConnectWithYourDeckChallenge by E Roebuck-Jones
Question: What do I want right now? 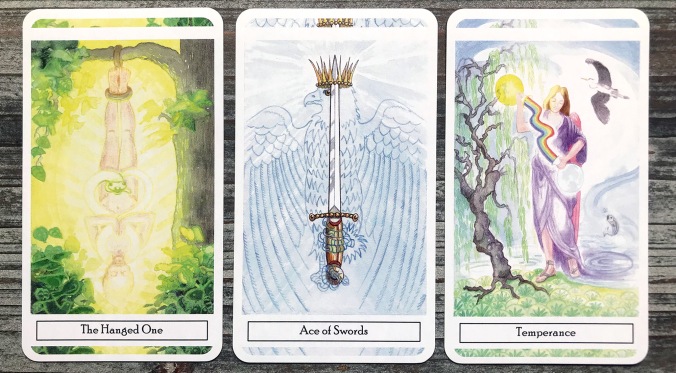 Reading Summary: A blend of new perspectives and new ideas combined together in a balanced, calm, and hopeful way (Temperance).

Take Away:  There is a hint in the flow in how these cards communicate with each other in reference to the colors.  Each of the two left cards is separate from the other, but elements of color from each blend into the Temperance card on the right. This speaks to me about developing both separately (taking in new perspectives, and the development of new ideas)… and then combining them together in a balanced manner.

#MidnightTarotChallenge Prompt
Question: What is my spiritual gift? 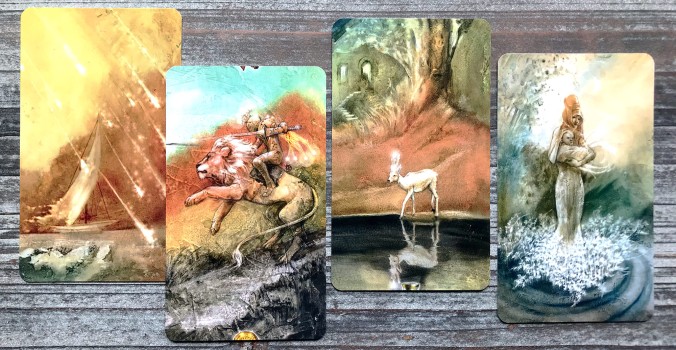 The flow of color in these cards indicates a fierceness and passion in the defense of others that comes from the heart.

The transition to water from left to right (choppy seas to calm waters to frozen crystals upon the pond at the figure’s feet) speaks of a need for balance and calm in all things, even in times of conflict.

Charging into the fray and chaos (the two left cards speak of chaos in the first and fearless confrontation through the knight on the lion in the right) with a calm heart and mind (the center card is filled with warmth but also with a good deal of tranquility is translated through calm waters and the presence of the white stag) in order to foster and protect others (the right card portrays a figure protecting a more helpless figure in the cradle of their arms with cool waters, calming colors, and ice crystals portraying a sense of balanced calm).

Take Away:  The spiritual gift that the cards are referring to here is my need to champion helpless and those that are treated unfairly.  I have a very strong need for balance in my life and an extremely demanding moral compass that requires fair treatment for all and a certain level of respect for all.

When my moral compass triggers due to witnessing the lack of fair treatment of those unable to defend themselves, I have a need to stand up and add my voice to bolster and protect them, and have no issue with stepping forward into the spotlight (or chaos) at those times to right that perceived imbalance.

One thought on “Motivations and Methods”

Self Worth and Personal Values

The Myth of Perfection

Too Much Armor Is Too Heavy