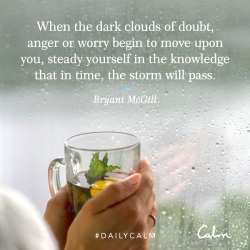 Today’s meditation was just over eleven minutes long and another guided meditation from the Calm app with added interval timer for my piriformis stretching.

The focus of today’s meditation was about that um…. I think it’s Icelandic?  The concept of watching the storm through a window while you remain comfortable and safe on the other side.  (*Looks it up and comes back.*) Gluggaveður.  Essentially it translates to “window weather” and refers to the kind of weather you like to watch but don’t want to be involved in.

The guided meditation took this concept, and used it to encourage how someone can detatch from the intensity of one’s inner feelings or the immediate reactivity of a situation in order to find calm and peace in the middle of chaos.   This… is not really good advice for me, to be honest, as I have spent the majority of my life detaching from my feelings and that is my natural inclination when something intense arises.  Now… I’m instead working on how to better connect with them.  Still, it was a nice meditation. 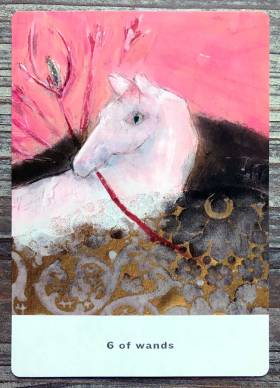 Today’s draw is the Six of Wands, which is traditionally a representation of accolades and praise, admiration and public/social recognition of one’s accomplishments.

This card actually echoed for me some thoughts I was having in the shower this morning about compliments and the motivations behind such things.  I had a long rambling dialogue in my brain concerning compliments, and how it’s always nice to hear compliments but how important it is to not allow them to go to your head.

I say this because when compliments are given, there is always a motivation behind them.  Always.  It can be something as kind or innocuous as someone caring about you and wanting you to feel good, or wanting to make you feel good because it makes them feel good.  Or it can be something as mostly harmless as someone wanting you to like them and thus they give compliments in the hopes to endear you to them.   There are also times, though, when compliments are used in less innocent and guileless ways.  They can be used to “pull the wool” over someone’s eyes or to manipulate, for example.

I came to the thought at the end that perhaps the absolute best kind of compliment is the unintended one or the “back channel” one.  That is to say when someone says something that was not intended as a compliment but you personally see as something positive.   And, the compliments someone may say to someone else about you with no thought or expectation it might get back to you at some point.   These are great and amazing, because you know beyond a shadow of a doubt that there is no motivation behind them directed at you.  They’re like little nuggets of pure gold panned out of a river, yes?

Anyway, I feel this card was an echo of these thoughts.  All compliments are nice as long as they are true, no matter the motivation behind them.  Just keep in mind that like the wide open eye of the horse in this card’s imagery, that you need to keep an eye on what those motivations might be.  Just in case. 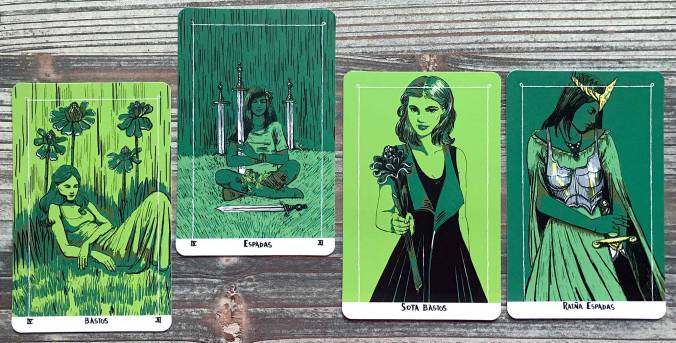 What area of my life is in need of some radical transformation?

Four of Wands and Four of Swords – You are currently in a time of rest and recovery, but that doesn’t mean it’s a time to just lie back at  home and let the world move on around you.  Instead, it’s important to keep moving and doing small things.  They don’t have to be big or showy as long as you’re not sitting stagnant.

What area of my perspective is in need of some radical transformation?

Page of Wands and Queen of Swords – See if you can’t be a bit less harsh with yourself and a little kinder.  Remember that you are still learning your way, even as you’ve done this all so many times before.  Don’t expect everything to just be the same as the last.  The skills you have learned can help you rise above and do better this time around.

#DiscordTarotolicsFeb2021 Challenge Prompt
Question:  Where have I been settling for “good enough” in my life? 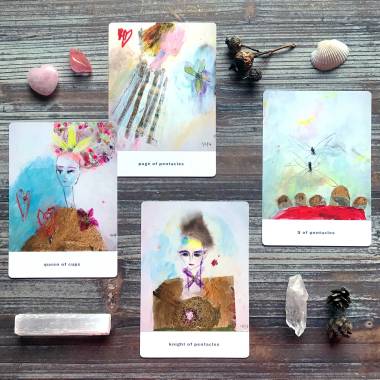 Take Away: We all have fears and worries that help keep us motivated towards our goals.  One of mine is my scarcity issues.  The fear of failing at keeping stability alive and strong in both my financial aspects and home life.   This is a motivator for me and not necessarily an unhealthy one as long as I don’t use it to push myself too hard or overwhelm myself with either too much work, or too much anxiety.

Currently (the past month or three) I’ve been sort of slacking on using this tool and over the past month it has turned into a bit of a stagnancy.  I’ve also, admittedly, indulged in quite a bit of retail therapy.  So yeah… it’s time to do a bit better.  Fair enough.

One thought on “Motivations and Praise”