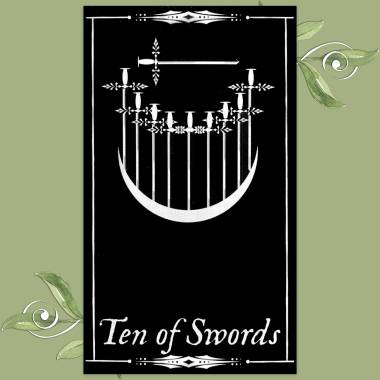 Today’s draw is the Ten of Swords, which is traditionally a representation of the end of a painful journey and other painful endings, the pain of betrayal, and moments of loss or defeat.

Here in today’s card and it’s imagery, there is a message encouraging you to acknowledge the issue you were faced with went far better than planned, and that you have come out on the other side of it wiser than when it began. The fact that there is one sword that is not piercing the moon, but instead lies resting above it all, is a reminder that things could’ve been much worse.

My most recent Etsy adventure with their customer support went far better than previous experiences.  They seemed to actually read my issue and understand it, and instead of brushing my concerns under the rug as usually feels to be the case, they appear to have taken them forward to the tech department, and resolved the financial implication that was involved as well.

I wish all customer service contact with Etsy could be more like this one, for… for once I actually feel heard.  It might have felt like a huge stab in the back at the time, but it was resolved far easier and better than expected and things could have gone far worse. 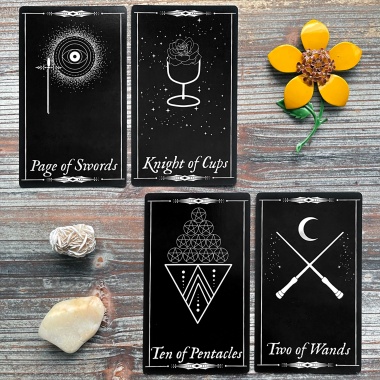 What skill in your tarot practice needs improvement?

Page of Swords and Knight of Cups – It’s time to learn a new skill… and stop hesitating.

This is about my explorations into mediumship. I am curious and I have a lot to learn in this area. I’ve been hesitating and putting it off instead of diving in to explore. This is a venue that I really didn’t have much interest in and tried hard to avoid in my practice for a very long time, but over the last few years my affinity for it has grown and my curiosity has been piqued. It’s time to dive in and explore the possibilities more fully.

How can you best work at improving this skill?

Ten of Pentacles and Two of Wands – Set a goal, and then make plans to work towards it. A lesson plan of some type, even loosely made, will help you in getting on track in studying and exploring this aspect of tarot more thoroughly.

A little structure can go a long way, and a goal combined with that structure will provide direction. I’m not always a big fan of structure, yet I’m aware that I thrive under its influence.

I had a wonderful nap today.  Usually my naps are kind of so-so.  A recharge, but not really good.  This one was real good.

One thought on “It Could Always Be Worse”

Shining Light Into the Darkness

Pity Parties Are Not Productive