Today’s draw is the Five of Wands, which is traditionally a representation of tests, trials, and conflict in the area of one’s passions, drive, inner spark, and values.

Look at that imagery. I’ve had that exact argument before.

The thing is? Sometimes values just don’t align, even with those you love. This card’s reminder is that these disagreements and moments of misalignment don’t mean that the end is nigh, or that you love them any less, or that they love you any less. It simply means that we are all unique individuals. 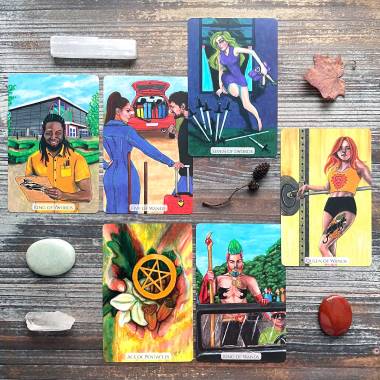 Mercury is in transition. What personal energy will best facilitate conversation with others today?

King of Swords, Seven of Swords atop Five of Wands – Take charge. Instead of clashing with those that simply refuse to see any perspective but their own, use you assertive nature to direct the conversation where you want it to go. You don’t suffer fools well, so simply don’t allow them hijack the conversation. Letting them do so will just end up with you irritated and/or frustrated.

How can I be a better friend to those closest to me at this time?

Ace of Pentacles, Queen of Wands atop King of Wands – A new project of theirs is in need of your influence to get off the ground. Lend your support and drive to their cause. This is not one of those times that they can do it on their own… at least not in the beginning.  They don’t need you to take over, but a bit of  guidance and support will go a long way.

I’m trying to make sure I get to bed at a semi decent hour today, so that my drive isn’t so difficult tomorrow.

One thought on “The End Is Nigh… Not Really”