Today’s meditation was just over ten minutes long… and I did it twice.   It started out with a full body scan, which is one of my favorite ways to meditate, and then settled on focusing on the breath for the majority of the time.

The message of the guided meditation, though, was one of self care.  It was about being kind to yourself and not allowing that inner critic free reign to tear yourself down.  That can be extremely tempting and easy to fall into during times of stress like the stress that we are all under around the world at the moment.  The meditation encouraged making sure you are keeping a focus on being kind to yourself, and not tearing into yourself for those things that are out of your control. 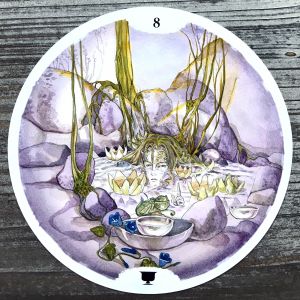 Today’s draw is the Eight of Cups, which is traditionally a representation of retreat and “stepping away” emotionally from a person or situation.

Once again, though, this deck speaks to me through its imagery rather than through any traditional interpretation, because what really stands out to me in this card is the nearly fully submerged person in the water, and the held up finger. In the book it speaks of that hand being an indication of the choice to either emerge from the water or not.   But what it speaks to me today is about waiting and patience.

It’s about the pause.  Right now in my area everyone and everything is in a sort of pause.  The message in today’s card is a reminder to wait.  Just wait. Gather what you need to survive (as referenced by the dishes  along the shore of the pond) and just wait.

#TarotForGrowthMarch Challenge Prompt
Question: How can I release self-doubt in my abilities? 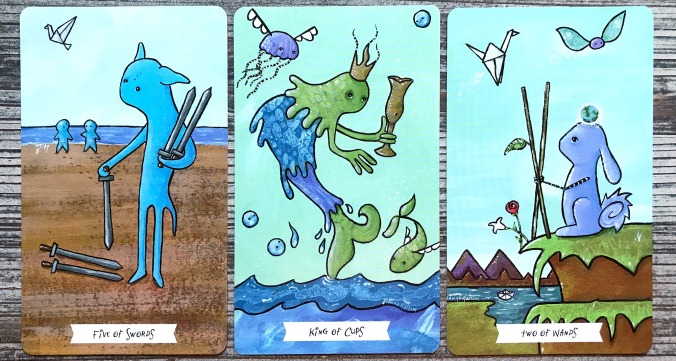 Reading Summary: Accept that those abilities are not a fluke (Five of Swords) and leave room for compassionate strength (King of Cups) as I look for ways to move forward both now… and later (Two of Wands).

Take Away:  With everything at a forced standstill right now, there’s a lot of room for self-doubts to creep in and muddle up the mind and emotions.  To keep that from happening it’s important that I keep in mind that the skills and abilities that I have are not a fluke.  They aren’t something that are going to disappear, but are hard earned and honed over time.  Being kind to myself and appreciating my strengths as strengths is important to keeping my self doubts under control,  as is making plans so that I don’t fall into habits of morose pessimism and other negative thinking that can begin to fester when I am left rudderless.

#DiscordTarotholicsMar2020 Challenge Prompt
Question: What do I need to take more pride in? 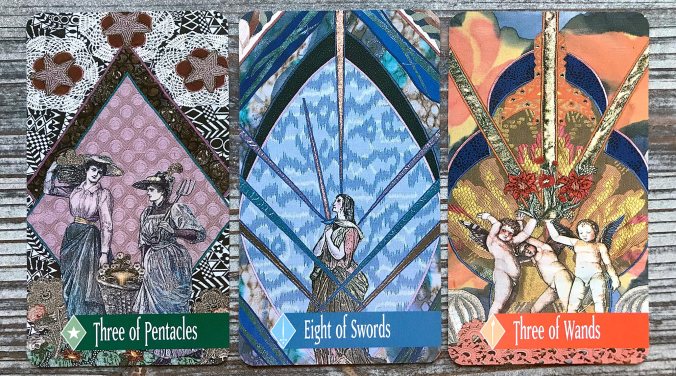 Reading Summary: My ability to provide guidance and direction (Three of Wands) out of the shadows and into the light (Eight of Swords) for myself and others  through my skills and abilities (Three of Pentacles).

Take Away:  This seems to be the theme of my personal readings today.  That is, that I have the skills and abilities to lead by example, and to provide both myself and others with the sense of hope and direction needed to keep the fog of depression and directionless discouragement from taking hold.

#ConnectWithYourDeckChallenge by E Roebuck-Jones
Question: How does my intuition speak to me?

Reading Summary:  Loudly (Dragon in the Seven of Chalices) and often (Knight of Wands), and in very mysterious ways that are difficult to grasp (Moon).

Oddly, this one took me a minute.  I think it is the mix between the intuitive hits and the traditional meanings in the cards here that gave me pause.   It’s almost like… a different dialect of the language I am used to reading.  New… different, and yet familiar enough to work it out.

Take Away: I was actually expecting something that described the “how” as in how I experience my intuition’s voice.  Instead, the message here is that the “how” is less about methods and more about an overall interpretation of “how”.

That is to say that how my intuition speaks to me is with a constant stream of input that is quite loud and always there, always pushing and driving and directing the way forward.  Those mysterious ways indicated by the Moon card speaking of the fact that that sometimes my “intuition” may be more than just intuition.  I’ve recently been considering that my spirit guides have been using the language/experience of my intuition in order to communicate with me as well.

Wands… and Their Place On My Path