Today’s meditation was once again not particularly useful.  I did make an effort this morning, but that effort was thwarted by a multitude of interruptions and…. it just didn’t end up happening.  So…  I will give it a go tonight before bed again.   That said?  I really need to do a better job of fitting it into my mornings, as I get a far better effect from a morning meditation than  I do an evening one. 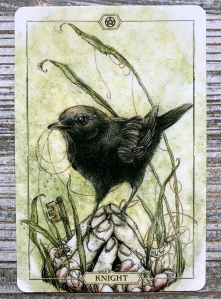 Today’s draw is the Knight of Pentacles, which is traditionally a representation of a beta energy, personality, or person in the area of resources, finances, and the physical world.  This often translates into themes of productivity and hard work carrying someone forward toward rewards.

What I see in the imagery of this card is the support represented by the hands that the bird perches upon, as well as ingenuity in the string the bird holds, and industry in the ant crawling upon the fingers.    I see the key speaking of how these things are a solution… a way forward.

The message in today’s card is about working toward my goals and finding the best way to do things rather than doing them as they’ve “always been done”.   To move forward, sometimes you have to look for paths and methods that take you “outside the box”.

#TarotForGrowthMarch Challenge Prompt
Question: What about myself have I been underrating?

Reading Summary:  This reading split into a trio of answers.  The big pic including all of the cards is about balance between fun/positivity and passions/drive. There is also a clear definition between the two left cards, which speaks of balancing responsibilities and fun/optimism…. And the right side which is also about the balance between responsibilities and fun/pleasure.  In each case, the cards reinforce the meaning of the whole.

Take Away:  These cards indicate that what I have been underestimating about myself is the ability to balance fun and pleasure into my business.  This is something I’ve been trying to tap back into after the fog I’d been experiencing through the winter, but I admit to have been struggling with it.

#DiscordTarotholicsMar2020 Challenge Prompt
Question: What do I need to focus on for self care for this full moon?

Reading Summary:  The imagery of all four of these cards is extremely grounded… and ground-centric.   This speaks of a need to stay well grounded even as I take possession of my interests and passions, and move forward toward my goals.  Make sure that I am not leaving my care behind in favor of these other interests.

Take Away:  I have a habit of getting wrapped up in interests and passions, and allowing other things to fall away into the background.  Although the winter sort of distracted me from this habit, I’m well aware that as I start to feel better, it will return   The cards indicate I need to make sure I’m paying attention to this tendency and not allow myself to get carried away.   Instead, continue to focus on the slow-and-steady progress I’ve been making and don’t push my self-care practices off to the side… they are important.

#ConnectWithYourDeckChallenge by E Roebuck-Jones
Question: Share a pic of your favorite tarot or oracle deck.