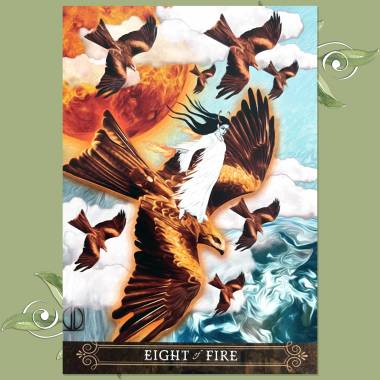 Today’s draw is the Eight of Fire (Wands), which is traditionally a representation of swifts action, alacrity, immediacy, and speed.

Sometimes you have to “move it or lose it”, and that’s what today’s card is all about. Not everything can be done at a sedate and slow pace. Flying, for example, as what is seen in the illustration of today’s card, requires lift provided by speed, whether it be the speed of the wind, the speed of the bird, or a combination of both.

In today’s card, we are invited to look in our lives for those things that are requiring our immediate attention. What needs started or done now? What can’t be put off? The Eight of Fire invites us to examine these things, but also to take action to deal with them as well.

Your Addiction – Medusa – You have a habit of using your alone time in unhealthy ways. Although there is a true need for alone time in your general make-up, it’s not healthy to isolate yourself too much, no matter how tempting that may be.

How to Introduce Moderation – Izanagi & Izanami – Spend more time with those it feels good to be around. Even just allowing them to chill as a part of your life has a positive impact.

You – Page of Swords – You love to learn new things and explore. Imagination has no limits for you and your curiosity is boundless.

Your Annoyance – The Moon – Delays and uncertainty sometimes can get in the way of all you want to explore and pursue. These roadblocks often self inflicted and always frustrating.

What To Do About It – Seven of Coins atop The Chariot – Work on staying enthusiastic through the long haul. Just because you can learn new things (reflects back to the Page) quickly doesn’t always mean that you should. Sometimes it’s better to take your time.

The #ConnectWithYourDeckChallenge Prompt by E Roebuck-Jones
Questions for September 11th, 13th, and 14th

How do I grow from my mistakes?

Eight of Earth – You grow from your mistakes by getting beat over the head by them again and again until you get it right. You’re stubborn, and sometimes that means it takes more than once to learn a better way. There’s nothing wrong with that, it just means you end up with more experiences than most.

When do I trust myself?

The Chariot atop Elder of Water – You trust yourself to guide other’s tempers back to grounded when normally emotionally balanced people tip over into the energy of being stubborn and unreasonable. (Taming Gideon’s inner Grumpus, for example.)

What can I do about the fear of being wrong?

Death – Being wrong is something universal; it happens to everyone eventually. Take these moments when you are wrong not as roadblocks, but as opportunities for change, transition, and/or transformation.

I made cornbread to go along with my chili.  I really like cornbread and I’ve been craving it for over a week, but the store hadn’t had any until I checked earlier today.