Pull at least three cards and use them to explain…
…and that’s why dividing by three is illegal. 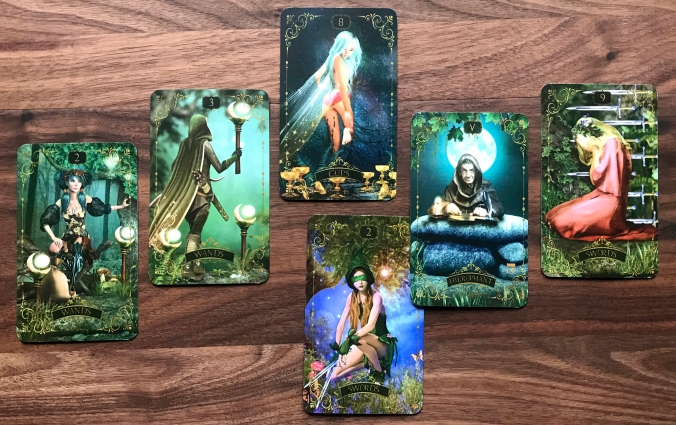 There was once a fairy princes that always longed for adventure and spent much time looking out at the horizon beyond the Lands of Faerie daydreaming about the day she could take off and find her own adventures. (Two of Wands)

With her friend, the Blue Jay, she made fantastic plans of where she wanted to go and all of the things that she wanted to do.  They discussed the world beyond the Lands of Faerie and the Blue Jay told the fairy princess many stories about how fantastic and adventurous life was beyond the horizon’s veil. (Three of Wands)

One day, after a particularly trying bit of conflict with her father, the fairy princess had had enough, and she began making plans to leave the Lands of Faerie for the world beyond the veil.   With her friend, the Blue Jay, she plotted her course and then slipped sneakily free of the big wise Oak her family had called their home for centuries.  (Eight of Cups)

Together they traveled a long distance, further and far beyond any she’d traveled before.  She trusted the Blue Jay to keep her safe and guide her way, but when they reached the veil and the gate that would lead beyond it, she was confronted by the gate keeper.

He asked her if this is what she really wanted?  If she abandoned the Land of Faerie, she would not be allowed to come back.   He set before her nine walnut shells and told her to choose only one.  That the answer would be hidden beneath the walnut shell, if she would turn it over to look. (The Hierophant)

Instead, she divided the nine into three and turned them over to reveal the hidden objects within.  In one was a teardrop.   Another held a gold coin.  In the third was a locket that held  pictures of her family inside.

And in the Land of Faerie, this is why it is illegal to divide by three.  For if the princess had chosen just one walnut shell, she would have received the locket alone.  A locket filled with memories to remind her of all that is good.   Instead, she chose three, and the message was confused in the translation… and she was lost to her family and the Land of Faerie forevermore. (Nine of Swords)

One thought on “Rule of Three – Story Time”