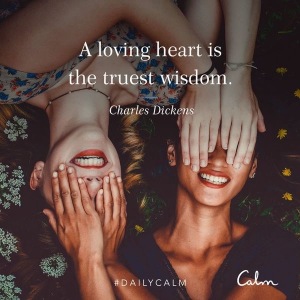 Today’s meditation was just over twelve minutes long, and was a meditation on fostering loving kindness for both yourself and others, including those that you don’t particularly like.

It spoke about how the practice isn’t so much used as a benefit for those that you dislike for whatever reasons, but helps us in our own feelings and in letting go of negativity through projecting of positivity upon ourselves and others.

I really enjoyed the practice, and it seemed to actually release a couple of tightly wound knots within my chest.  It’s definitely one I will revisit again. 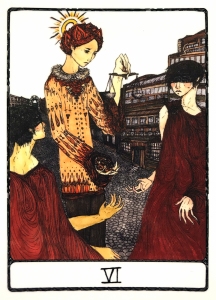 Today’s draw is the Six of Coins, which is a often a representation of harmony in the area of finances, resources, the physical world, and manifestation.   This can often translate into themes of generosity, charity and acceptance of charity when needed, and the balancing of scales in the areas of wealth and fortune through sharing.

I think that the message of today’s card goes really well with today’s guided meditation. Although one is more of an emotional and spiritual theme, and the other based more on the earthly plane, they both speak of generosity.  Together they are a reminder that generosity is not just something that benefits others, but also that benefits the self.  It is healing to the inner self to give to others, and healing as well to be on the other side as the recipient of such gifts.

#TarotForGrowthJanuary Challenge Prompt
Question: How is the universe inviting me to express gratitude for that? (Built off of yesterday’s reading.)

Reading Summary: The King of Swords is bracketed on either side by resistance to change.

Take Away:  Don’t be such a stick in the mud.   Yesterday’s read on this topic was about going with the flow of my emotions rather than trying to close them out and allowing the more negative aspects of my addictions to take a step forward as a result.   The cards in today’s reading make it clear that expressing gratitude for the realization of how to go about this path isn’t in thinking about it or saying anything about it, but rather walking the walk and doing the hard parts like a boss while embracing this change.

#DiscordTarotholicsJan2020 Challenge Prompt
Question: How can you take advantage of it? (Built off of yesterday’s reading.)

Reading Summary:  I shouldn’t worry so much about my creative spark having been stolen away and going dormant as it was forced into submission by the fears and worries I was battling (Ten of Swords atop Seven of Swords).  It’ll come back stronger than ever (King of Wands) and with a vengeance (Eight of Wands) once I find my footing and my confidence starts to bolster once more (Nine of Pentacles).   Oh… look.  I read the cards backwards (realizes it after he’s typed it out).

Take Away:  That letter I received in the fall caused an internal mess that I didn’t even know was festering and growing under the surface all this time.  Over the past few weeks, it had gotten to the point that my creative spark suffered as a result and my creativity in my business became a bit of a chore rather than a joy.   These cards indicate that in having realized this process, to heal from this I need to recognize that things are stable and going to be okay.  I need to reestablish that sense of security, and by doing so my creative spark will find roots with which grow and flourish again.

#ConnectWithYourDeckChallenge Prompt
Question: How can I treat myself with compassion? 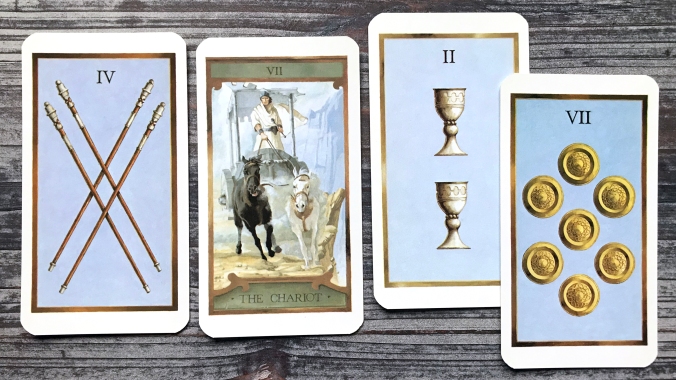 Reading Summary: Take the time to celebrate (Four of Wands) my accomplishments (Seven of Pentacles) with others (Two of Cups) now rather than putting it off until later (The Chariot).

Take Away:  Yesterday, while I was working my ass off on the overflow of unexpected orders, you reminded me to take pride in my work.  Although I didn’t realize it until you  said something, it was something I really needed to hear.   It’s something I need to hear more, because although I have a very hard time accepting anything I do is “good enough”?  Hearing it from someone I love and care about helps.  A lot.

Pull at least three cards and use them to… tell us a story about a pair of shoes.

There’s smooth wood under the his soles as he sits on the porch. Once upon a time he was young and spry and new (Ace of Cups). But heat and cold and time has taken their tole upon him now and where once his soles were flat and strong, now they are brittle and curled slightly up at the toes. (Ten of Swords)

That’s because the leather is dry now. And as it dried, it made his toes curl up a bit, as giving him a different view over time. When first set here, he could see out over the wooden planks and watch the children play in the yard, the come and go of the mailman each day, and the passing of cars on the old dirt road.

But as toes curled, his view changed. Winter came and he watched the snow fall as temperatures plummeted, and then the world became warm again. Where once he could see the grass, by the time summer came again, he could no longer (Four of Swords). He couldn’t watch the boy that mows the lawn and dream about those grass stains anymore, instead his view began at the road and the trees on the other side, and just a peek of the sky (Four of Cups).

And he waited. Loyal and patient. He waited for someone to remember about the old pair of sneakers once new, and now long hidden under the rocker on the porch.

But winter came again and the cold gripped the world. The leather tightened further, dried out by the chill in the air (Nine of Swords), and his view again changed.

Now he can see the sky and the trees, but by the time summer comes again, the road is now gone. He sees planes that fly overhead, and watches the fall of rain as it splats and patters on the ground he can no longer see. Long nights filled with crickets songs and days filled with the squeak and slam of the screen door as the children come and go.

One day a windstorm came (imagery from the Three of Staves) and tossed branches from the trees nearby onto the porch, and during the cleanup that follows he is finally found. Alas! He is discovered! Picked up and brought inside, he is cleaned and moisturized, and his leather sighs in relief as oils are rubbed in (Princess of Cups) and he’s set upon the table to dry (Temperance).

For a full day, he watches the light come through windows and the comings and goings of the big, happy family (Ten of Cups). He is picked up by many, and tried on by some, and as night falls he thinks of his porch and the crickets and misses the moon (The Moon).

The next day, he is taken up and brought back outside, but he is not put on the porch. Instead, he is taken beyond the yard and along the road past the trees he’s known for so long (The Chariot). In town, he is handed to another and by the end of the day he is among other shoes (Seven of Cups), sitting on a box in a display window in town.

Then a day came while sitting in the window that a woman (Queen of Coins) and her small son stop to look inside and the little boy points to him through the glass (imagery on the Six of Cups).

They come inside, and in short order he is fitted on the little boy’s feet (Two of Cups). The boy wiggles his toes, tickling the shoes and causing a spark of glee, and the boy giggles happily in response to the energy created (Ace of Cups with Four of Staves).

The boy does not take off the shoes, but walks around the small shop with them on his feet as his mother deals with haggling and payment, and then… he tastes the joy of service after years of misuse (Six of Swords) as the little boy wears him out of the store and a new adventure begins. (Eight of Staves)

Something Worth Fighting For