Pull (at least) three cards and use them to… tell us about a (real or fictional) mistake that turned into a happy ending.  (I went with fictional.)

There was once a young man that always flaunted the rules (The Fool).  He loved to drive fast, treated his car horribly and never took care of it (The Devil).

One day while whipping in and out of traffic and driving far above the speed limit (The Chariot), his cars breaks went out and would not work. He ended up in a horrible crash (The Tower).

Taken to the hospital he learned that in his folly, he’d been severely hurt and it would take many months or even years to recover from his injuries (Justice).

In the end, the strength and stability and support that the physiotherapist provided, combined with the time I it took for the young man to recover from his injuries gave the young man time to grow and he learn from his mistakes (Death).

When he returned to the road he did so with more respect for the law, more loving care for his car, and less impatience (Temperance).

Pull (at least) three cards and use them to… describe a walk outside.

Strength – Exiting the car is the easiest part of the day.  The little gray Prius is parked in the small lot hidden among the trees and he exits the car to pull out his pack.   Turning off his phone it is slipped into one of the pockets of the pack before the small daypack is slid onto his back and the trunk is closed.

Moving to the trailhead, he pauses at a post with a wooden box upon it.  Lifting the lid, as expected, what is found inside is a notebook and a tethered pencil.  The pencil is picked up and his name is written down along with the date and the time, as well as the anticipated time he would be on the trail.   The box is then closed and left behind as he moves to take the first steps upon the spongy soft ground of the trail.

Following the path to a small bridge that crosses a busily babbling stream, booted feet find the other side and he looks up the sheer face before him.  Breathing deeply the damp, musty air filled with the scents of evergreens and decay, his gaze follows the zigzag of the trail going up the mountain as far as the trees will allow.

The hike to the top is just over three miles, with an elevation change of 3500 feet in that short distance.  Nearly 1200 feet of elevation per mile of trail making it one of the most difficult trails accessible to the general pubic.

Hanged Man – As he makes his way along the switchback trail, following the long stretches of straight that zigzag up the mountain and sharp turns at the end of each, muscles stretch and blood pumps.  His body protests as his body demands more oxygen to fuel the effort put fort as each step along the path is the same as taking a double step on a staircase… without the staircase.

Using roots and rocks as footholds, each breath becomes an agony and a pleasure at once, the fresh air filling his lungs even as his lungs ache greedily for more and more.  A sheen of sweat coating flesh blending a hint of clean sweat and personal scent into the damp crispness of the air.

But over time, the body adjusts and breathing evens out.  Refusing to stop, refusing to pause and catch his breath or rest, the agony increases and increases… and then finally begins to fade.  To shift as the fire in muscles turns into a warm, wobbly burn.

Judgement – Each quarter mile is marked, but it is not those markers he seeks but rather the green sign with white letters high up upon a tree where the trail finally splits.  The words “Summit Loop” a blessing.   It is the holy grail that does not truly mean the end… but rather a shining light of hope that tells him that he’s done good and is getting there.

When he comes upon that split in the trail and the beautiful sign, he finally takes a moment to pause in the bliss of being over half way there.  A hand lifting to press against the stitch that quickly develops in his side as his body’s adjustment to the extreme exertion now tries to settle and relax.

Pulling off his pack, he pauses to down half a bottle of water, and finish off a couple of protein bars, his back resting against one of the trees off-path as he looks up at the gray sky and lets the crisp bite in the air at this new elevation cool him down and dry the sweat on his skin.

Justice – Eventually he has to get up and continue upon his climb, and his body screams in protest as muscles that had tightened up now object to rising and joints that are stiffened try to move.

Familiar with the trail, he takes the left side of the split, choosing to take the steepest part of the loop first so that he climbs it rather than giving his knees the agony of trying to going down that incline.   Muscles screaming and lungs aching once more, he pays for his break upon the spit in the trail with a steep decrease in the stamina he’d gained over the nearly two miles he’d hiked thus far.

As he continues to climb upon the trail, trees become more scarce and the spongy earth beneath his feet turns harder, jutting rocks breaking through the soil become footholds on the incline as he pushes on, forcing his body to keep moving through the pain and promising that it will be worth it once he reaches the peak.

The Hermit – As he climbs this steepest part of the trail, the treeline opens up.  Jagged silvery spikes of an old forest fire open up the view on one side of the trail, the other side filled with sparse woodland that slopes down and away the way he had come.

Here and there remnants of snow linger on the ground, tucked into the crevices of rocks and grooves between tree roots.  Scenic views of the valley beyond, the peak of another climb not far off, and the large shimmering lake far below greet him and soothe the pain even as he continues on, fresh air now crisp and cold chills the tip of his nose and his cheeks.

Soon he arrives at at a small outcropping of rocks, and a sign that indicates that he has reached the peak of 4301 feet.  Here he stops and removes his pack, setting his ass upon the rock and tilting his head back to catch his breath.

Here he will linger.  He will sit and enjoy the view and the chill in the air. He will eat lunch and he will hydrate.  He will meditate, and he will enjoy this time alone, savoring the feel of muscles well worked and lungs washed clean of the pollution of the city so that they can be filled instead with fresh, crisp air.

Soon he will have to take the trip back down… but for now?  He will savor the fact that he is the only human for miles and soak in the peace and solitude.

Pull up to three cards and use them to… create and/or describe your perfect vacation.

Pull (at least) three cards and use them to… write about either a real or fictional abandoned building. 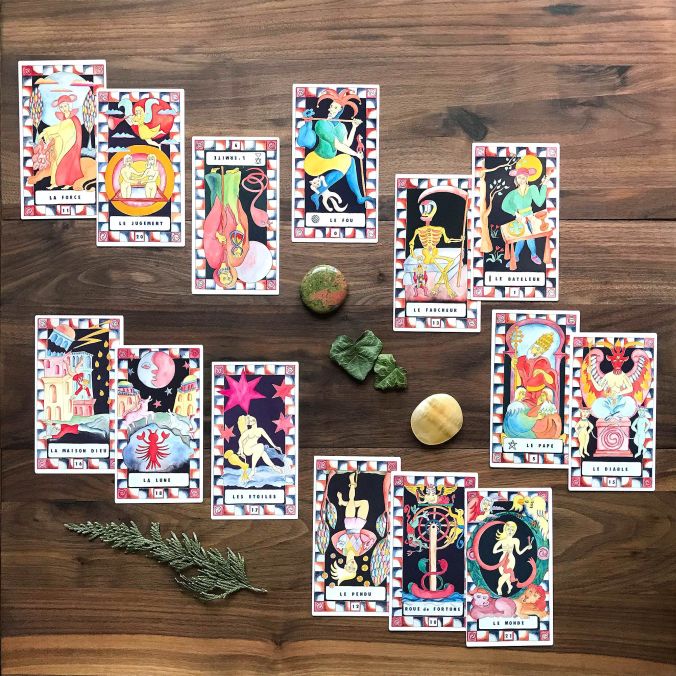 He was once a pillar of the community (La Force) where people came together and socialize. A beacon of light to all that shined brightly on even the darkest of nights (Le Judgement).

Disrepair came upon him as less and less people came to visit and upkeep decreased, allowing deterioration to sneak in.

Then one day the lights shut down and the doors were barred.  Seats were left to gather dust that had once gathered rumps of rapt men and women and children. (L’ermite)

Many people felt they no longer needed the hope that he represented (Le Fou), while others found other ways to entertain, uplift, and educate themselves (Le Faucheur and Le Bateleur).

Now what had once stood tall crumbles (la Maison Dieu) with neglect in an uncertain world (La Lune).

And yet still, he his hopeful (Les Etoiles) that in time a new purpose will come (Le Pendu and Wheel of Fortune) and people will return once more (Le Monde).