Today’s meditation was just over nine minutes long and ended up in me dozing off into a much needed nap.   I know I made it almost to the end, because I remember her talking as I dozed off, and she really only talks at the end in most of the meditations.   But, for the life of me, I couldn’t tell you what the meditation was actually about.   It was obviously quite relaxing, though, as I dropped off to sleep without any difficulty at all. 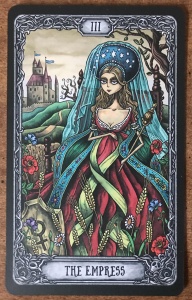 Today’s draw is the Major Arcana’s Empress card, and although this card is not usually read this way, what came to mind when I saw this card this morning was “Be the better man.”   That is to say, taking the high road and moving beyond the behavior of others.

Sometimes, this can be hard, yes?  Although, I have to admit, becoming non-verbal has definitely made it a bit easier.  The fact is that without a voice, it is harder to react, and often feels that it is just not worth my time.  When you have a voice, on the other hand, it’s much easier to “pop off” when provoked.

Traditionally, the Empress is a representation of fertility, nature, and abundance.  She is the “mother nature” card, and represents a regal but nurturing energy that spans the scope of the human experience, rather than referencing any one aspect of it.

Question: What message does my inner self have for me at this time?

Reading Summary: Be the boss (The Emperor), tap into your strengths (Strength card), and do your work (Eight of Pentacles).

Take Away: I think that the cards are pretty self explanatory in this reading.  They definitely jump out at me and are very clear in their message.  With the holiday rush less than a month away now, I’m down to crunch time when it comes to getting ready.   There’s a lot of work involved in the preparation for that time, and the cards are saying that I need to make sure I work hard at being prepared, because the more of the work I can get accomplished now in preparation, the smoother that rush will be once it arrives.

One thought on “Be the Boss…. and The Better Man”

Emotions Are Not a Weakness