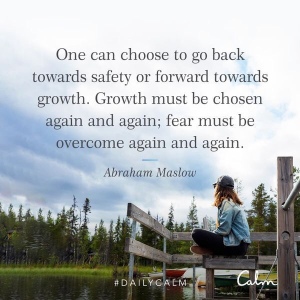 Ugh… ok so I planned to do this post after a nap when I got home… and then I slept FOREVER.   So the post is super late today.

Today’s post was ten minutes long, and focused on sitting with discomfort instead of avoiding it.   Whether this is physical pain, awkward moments, uncomfortable situations, etc, the focus was upon not running away from these situations or experiences, but rather using them as learning experiences for personal growth and education.

I learned this technique very early in life, and it has served me well.  It’s a big part of the reason that, even though I have had some rather significant hurdles and challenges in my life and not come from them unscathed, when people ask if there is anything I would change… the answer is no.  I would not be who I am without each and every one of those challenges and experiences, and I’m pretty happy with who I am.

Today’s draw was the Five of Imps (Wands) which is a representation of struggle, strife, conflict, and competition in the area of one’s passions, drive, and ambitions.

What stood out to me in this card this morning, though, isn’t the battle of the imps, Rather, it was the little demon cat in the lower left corner, and the moon watching on from above.

Today’s card is a message about not getting involved in things that have nothing to do with you. It’s OK to stand on the sidelines and watch and let them work it out for themselves.

Although this wasn’t something that applied to my day as a whole, I think that this is a really good reminder.  I’m one of those people that likes to help, but there are times when I need to remember that stepping in to help isn’t the best solution, for myself or for others.

I did the #TarotForGrowthOctober prompt again today.

Question: How can I better attune to my intuition? 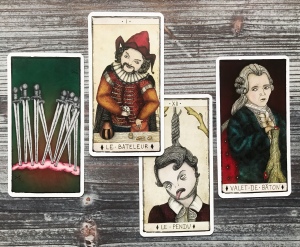 Take Away:  Not the answer I was anticipating when I picked up the cards to delve into this question!  That said, what I see in these cards is that I could reach for an even better connection with my intuition.  I could push on to the “next level” and do the work to find new perspectives.   But in the end?  I have other things to focus on that are better uses of my time at the moment, as I am already very much connected to my intuition, and deepening that connection more may not be something I’m ready (or able) to handle right now.

This week’s question from the Pagan Perspective YouTube channel is about dealing with intolerance not just outside of the pagan community, but inside of the community as well.

Topic for the Week of 7/29:  “As pagans, how do you handle the topic of religious tolerance from both outside and inside the pagan community? How do you operate in spaces that might be intolerant? I have found religious intolerance from both inside and out and I am having a hard time navigating the topic as well as trying to figure out how to react/handle hostility towards my religion and path.”

In my day to day life, I run into intolerance all the time.  Due to being mute, this is just a part of my every day, or at least any day where I have to interact with strangers… which is just about every day.

Religious intolerance, on the other hand, really isn’t something I deal with very often.

There had been a time when I was traveling that I visited some places where it would have been potentially dangerous for me to be open about my faith, but I was very aware of this fact and took precautions to make sure this didn’t happen.

Now, in my present life and location?  It’s just not a problem I have to deal with all that often.  Not that it doesn’t present itself, but simply that I very literally chose not to deal with it.  I don’t invite people into my life that are not open-minded and tolerant, and I don’t give my very precious time to the same.

It’s easier (and honestly far more positive to the energy in my own life) to simply step away and detach (mentally, physically, however possible) from the source of the hostility or intolerance. I find those that approach with hostility and intolerance are not generally open to being educated, so it’s not worth my time to engage. I think it helps, though, to be well seated in your own belief system and path. When there is a stable foundation and certainty on where you ‘fit’ into the world, it’s much easier to give others approaching with hostility and intolerance less credence.

My most common response when someone demonstrates religious intolerance and/or religious hostility directed my way is to look at them like they’re an idiot (or an epic disappointment) and then walk away.

My second most common response is very similar, which is simply to smile, shake my head in a (I’m so glad I’m not you) sort of way, and walk away.

These reactions are generally the same regardless if the source of that intolerance/hostility is coming from someone within the pagan community or from outside of it.  I really just don’t have time for that shit, and I feel giving that type of behavior my time and energy feeds that negative energy and may be perceived as a form of encouragement.

Exceptions?  Only one that I can think of.   If the person I perceive as being intolerant indicates in some way that they are not displaying intolerance so much as an ignorance with a openness to learn?   I might try to better explain my views and perspectives.    I run into this sometimes in the pagan community, and occasionally with people of other religions specifically in relation to cartomancy.