Today’s draw is the Tower card, which is traditionally a representation of sudden and chaotic change, a forced transition, and tearing down old establishments and constructs.

For a minute when I first looked at this card, the tower looks like it had a humanoid shape with the cats being arms and the crack down along the earth being a leg. It looked like the figure was ducking and running for cover.

Change is good. How can you build something better and more stable unless you tear down the old shit first?

As an adult, where am I neglecting myself at this time?

Ten of Pentacles and Nine of Cups Rx – You are sacrificing your happiness for stability.  A little bit of sacrifice can be a good thing, but you’re taking it a bit too far.

How can I begin to resolve this pattern of neglect?

Wheel of Fortune and Eight of Pentacles Rx – Through good times and bad you need to make sure that you’re taking time off, and not focusing so hard on work that you’re missing everything else around you and distancing yourself from what really matters. 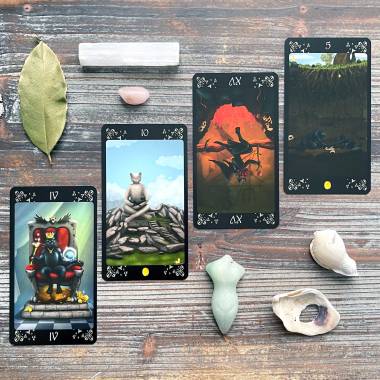 Where can I be more charitable with my time/feelings/thoughts?

The Emperor and Ten of Pentacles – Don’t be so goddamn judgy with yourself about what makes you feel safe, secure, and in control; and pick up on your meditation in order to inject a more stable feeling into your life.

Notation: The reading of these two cards is 100% about the imagery, and not what the cards are in the Tarot. The imagery and message (shoved down my throat) from the cards in this instance supersedes everything else.

Where is my biggest opportunity to prosper?

The Devil Rx and Five of Pentacles – Use your feelings of scarcity to avoid overspending.

I am playing some serious catch up and I have no idea what the self-kindness for this day might have been.

One thought on “Don’t Run”

One Day at a Time, One Step at a Time

📆 Transitioning from November to December

Weekly Creativity Prompt – Manna From Above