Today’s meditation was skipped due to orders day and a worry that I wasn’t going to get everything done in time to ship it out. 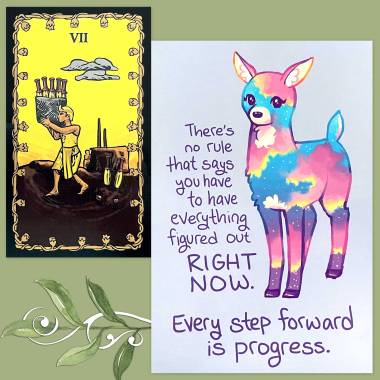 Today’s draw is the Seven of Swords, which is a representation of cunning and strategic thought, often portrayed as being of the thieving and betrayal variety.  It also represents leaving behind what one cannot easily carry, and getting away with something.

You know how sometimes when you rush to get out the door, you grab the things you need and run, then realize later on in the day (or on your trip) that you forgot something essential?

Today’s card is asking… why are you rushing?  Why are we either waiting until things have gotten to the point that we’re rushing, or putting this “last minute” expectation on ourselves in the first place?  So many things that we pushy ourselves to rush at don’t need to be rushed.  Yes, there are occasions when it’s necessary, but there’s not as many necessary occasions for that rush as there are those that we force upon ourselves. 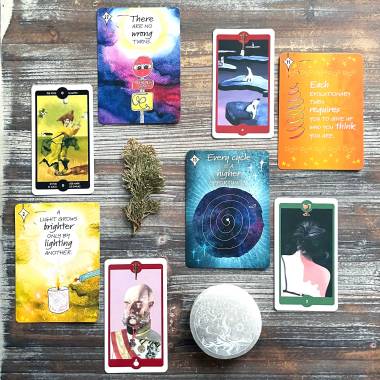 Think of something that recently made you smile or happy, focus on that thought and draw a card.
There Are No Wrong Turns and The Fool

Hiring a new housekeeper takes a bit of trust and faith in humanity. You’re letting this person into your home for the purpose of touching all yours stuff and trusting them not to take or break anything as they explore your home. It can be harrowing and nerve wracking, but every journey must start with a first step, and that includes finding someone to clean for you.

Pick a line from a song and use it to draw a card.

Everyone is always so focused on their solitary goals and appearances. Is it any wonder that the world is now at a point of striking back against our selfish and self serving ways. The earth is a living thing, and it’s tryin to teach us a lesson. The question is… will we listen?

Pick a line from a book and use it to draw a card.
Every Cycle Is a New Opportunity and Two of Cups

“Everything he touches becomes more of whatever it is—more alive, more vigorous, more powerful, more awesome, or more awful.” – The Faeries’ Oracle by Brian Froud

Pick a line from a movie and use it to draw a card.
A Light Grows Brighter Only By Lighting Another and King of Wands

“…there’s no such thing as a lie. There’s only expedient exaggeration.” North By Northwest

This quote, and the cards that came after it’s selection, reminds me of Mr R.  He once told me that a lie is never a lie until you get caught, it’s a “story”.  This is not something I particularly agree with (or at all, actually), but it is what these cards and the movie quote bring to mind.

DECK USED: THE COSMIC JOURNEY ORACLE AND TAROT OF THE IMAGINATION 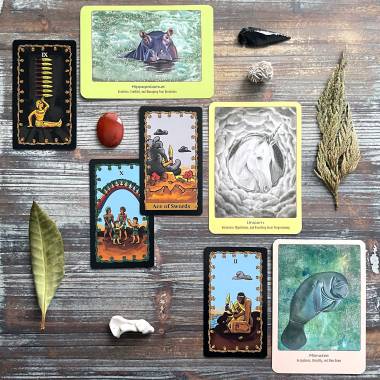 I Blame Myself For…

Hippopotamus and Nine of Swords – The failings of my mental health. Although I know logically that this isn’t true, I often see my mental health struggles as one of my failings. I am aware that although this feels like taking ownership, it is not empowering.

I Blame Others For…

Unicorn, Ace of Swords atop Ten of Cups – Successful communication with others. I never take credit for my ability to communicate with others without it falling apart. I feel like I am constantly bumbling when it comes to communication, and that I have to be extremely careful not to fumble things. I always feel like the potential for being misunderstood is huge, and the consequences explosive, like walking through a minefield. When things go well?  It’s always someone else’s fault.  When things go badly, it’s always mine.

How can I begin to release blame from my heart?

Manatee, Two of Swords – I need to allow myself the time I need to make decisions instead of pushing for always faster and more.  It’s hard for me to remember that pausing and mulling things over is really okay, and that the only deadlines I have to deal with the majority of the time are my own.

It was a super busy day and I just can’t remember if I did anything particularly kind other than making sure that I got enough to eat.

One thought on “Slowing Down”

Shining Light Into the Darkness

Pity Parties Are Not Productive