Just a little creative writing and story telling exercise.  I will be starting something like this with you once your basic lessons are done with the tarot suits.

Parameters for Part 1:  Draw (at least) five cards. Use one card per sentence to tell us a fun fictional tale. 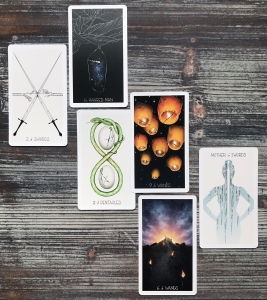 There was once a young man at the end of his rope stuck upon a path that split in two different directions (Two of Swords).  He stood at the head of the path in indecision, unsure which way to go and seeking insight from his surroundings to give him a direction (Hanged Man).

One path lead to stability and responsibility, but would take a good deal of effort and balance to make work (Two of Pentacles).   The other path lead to adventure that would require a great deal of bravery and resistance (Nine of Wands).

What he really wants is success and accolades, though, and the path that contains adventure appeals to him the most because of this (Six of Wands).  Thus this is the path he chooses as he steps from the cross roads to seek the spark, gathering his energy and strength in close as he prepares to step into the unknown with the open receptivity for what is to come, but the stability of good sense to assist him in keeping him on his path (Mother of Swords).