Today’s meditation was ten minutes long, and I finally managed to do it in the morning today! Honestly?  I get so much more out of it when I do it first time in the morning. Sometimes that’s just not possible, but I am going to try harder to make it possible more often.   The focus of today’s guidance during the meditation was about forgiveness, and I want to quote something that I really liked that was said during.  The instructor spoke about the important of forgiveness, and defined it as such…

“Forgiveness isn’t meant to erase what happened.  Instead, it’s a decision to let go of the resentment we’re holding onto.  It allows the clutch of irritation and bitterness to loosen its grip.  Choosing to forgive doesn’t deny the other person’s role in hurting us, and it doesn’t minimize or excuse the wrongdoing. But what it does do is create the opportunity for us to find peace.” – Tamara Levitt

I like that.  I think that too many people think that forgiveness means that you have to totally forget about what happened and excuse the person for their actions, but that’s really not what it’s about… and I think that quote expresses this really well.

Today’s draw is the Seven of Cups which is often about having too many choices or being overwhelmed, and that is exactly what I see in this card today.

The appearance of the Seven of Cups in today’s draw is a warning to be sure I am not allowing myself to become overloaded and overwhelmed emotionally while I am distracted by the holiday rush and everything I need to get done.

I am dealing with a small bit of a drop after the drown the other day, and my instinct is often to bury these things and ignore them when I’m feeling overwhelmed by the world as a whole.  This card’s advice is to not do that.  Don’t ignore it, or those emotions will topple over and crash to the ground in a mess.

Question: What regret hangs most heavily upon me from this year? 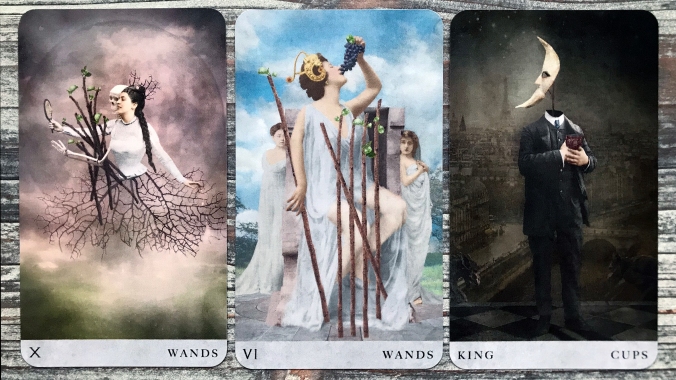 Reading Summary:  I feel like my self imposed overload (Ten of Wands) this year has held me back from the amount of success that could have accomplished (Six of Wands) as well as from spending more time with you (King of Cups).

Take Away:  I need to get more organized about how I do things for the business. This balance is about finding a happy medium between administrative tasks and the creative spark that is always so very persistent within me.  I put off the administrative tasks because I don’t find them pleasurable or particularly interesting, and then they build up and I have to “binge work” to get through them. Back when the business was slower, that was fine.  But, over the past few years as things have picked up, it’s started to become a problem.

The Topic for the Week of 12/9 from the Pagan Perspective YouTube channel is not a question at all, but rather, it is an encouragement to “Show and Tell”.

I thought for this I would like to show what my mother gave to me when I went to visit her over the week of Thanksgiving.   She really took me by surprise and I was hugely honored to be given the gift that she gave to me while  I was there.

The box of cards pictured in this post are my great-great-grandmother’s divination cards.  Or, rather, the last set of divination cards she owned before she passed away.  In her lifetime, she had gone through a number of decks, but if I understand correctly, she always burned them when they were replaced by a new set.   This set was the set that she used in the decade or so before she passed. 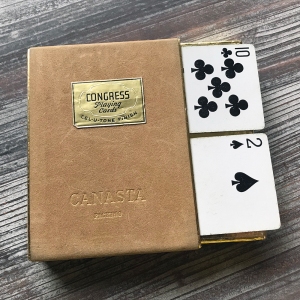 Interestingly enough, there is a spell of some kind cast on this deck.   I could feel the energy of it when I held the box in my hands, and the shift of that magic in my sliding open of the box (which works like a drawer) and found the two cards concealed in the bottom.

I asked my mother what she knew about it, but she didn’t know anything.  She has never even opened the box. This means that my sense of that energy was correct and those cards slid underneath the box’s “drawer” are indeed a part of the spell cast upon them.

While going through the drawer where these cards were tucked away, my mother came across an old deck of the Gypsy Witch Fortune Cards.

Interestingly, she thought this deck was mine, as it was the first deck I was ever given.   But, I have my deck already.  And L has hers as well.   This mystery deck was tucked deep in the back of the drawer, under the box of my great-great-grandmother’s cards, and also contained a small lock of hair.    These were given to me as well.

I have brought both of them home with me and carefully wrapped them up (boxes and all) in a silk scarf that used to belong to my grandmother.  At the moment, that bundle is sitting on my altar in place of the hand mirror I had been using as a representation of my ancestors.   I feel extremely honored to have been given these gifts and I cherish them more than I can possibly express.

Something Worth Fighting For