This is a reply to Simon’s newest hashtag over at The Hermit’s Cave on YouTube.   His question was what are your ultimate favorite Tarot, Oracle, Lenormand, and Playing Card decks… plus a wild card number five.   For his wild card, Simon introduced his favorite crystal, and I will be using that as my wild card as well.

Please keep in mind that some of these will change over time.  Others have been the same answer for years and years. 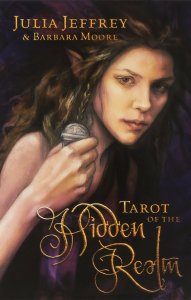 Favorite Tarot Deck — The Tarot of the Hidden Realm by Julia Jeffrey and Barbara Moore. This became my favorite from the moment it came out of the box.  It was much different than any tarot I’d owned to date, and when I ordered it, I wasn’t entirely sure how I would click with it.   As soon as the deck arrived and I opened the box and got the cards in my hands, though, all those worries disappeared.

I connect in a deep and profound way with the artwork in these cards.  The deck feels perfect, from the way they shuffle and fit in my hands to the artwork on the cards, and even the accompanying guidebook, which I see as more of a book of short stories than a guidebook.  I just love them.  In fact, I just recently bought a back-up set in case anything ever accidentally happens to the set I currently use.

Favorite Oracle Deck — For oracle decks, I’ve really found that it changes regularly. I have a “primary deck” for both tarot and oracle that I change out each month.   I might use others during the month as well, but these decks are my “deep dive” type of decks where I spend the majority of my time with them specifically.   I’ve found that whatever oracle deck I’m using during this time?   That ends up my favorite… at least until the next month comes along. 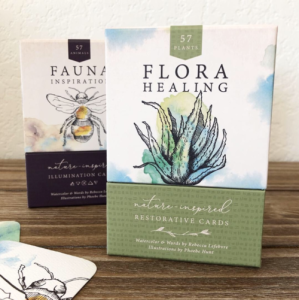 Currently, I’m combining the Flora Healing Cards and the Fauna Inspiration Cards (both by Phoebe Hunt and Rebecca Lefebvre) into one deck and using that as my oracle for the month of July.  These are beautiful cards filled with flora and fauna in watercolor imagery and include the elemental affinities on the top of each card as well.  On the back of the cards is a paragraph that explains the significance and guidance for the fauna or flora represented on the front.   I really like these.   They are not the normal gloss card stock, but something softer, which means you have to be a bit more careful with them than most decks, but surprisingly I don’t mind it with these decks, in fact…. it sort of “fits” really well.

Favorite Lenormand Deck — This was difficult, but I think my favorite of all time is the 1889 Lenormand by Jennifer Sager.   I like the earthy colors and the artwork that is both soft and yet very clear at the same time.  It has that “old time” feel of the Lenormand decks I grew up with, but with a hint of modern style.

I have a feeling this will change if I can ever get my hands on a copy of Kelly Fitzgerald’s Story in Color Lenormand.  I’ve yet to get this deck into my collection, and it is not traditional imagery for the Lenormand by any means, but there is something about the images that I’ve seen that makes me think it will end up being a favorite for me.

Favorite Playing Card Deck — The Daydreams expansion pack of the Dixit Cards. They are not a regular playing card decks, but they are game card decks, which I personally use as intuitive oracle decks.  So maybe these should have gone up in the Oracle section? 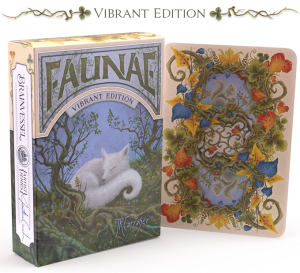 Playing cards as in poker decks?  This one is slated to change very, very soon… but at the moment it is the Aqua and Creme playing cards put out by Bicycle (and are notoriously difficult to photograph), which I think might be out of print now, but can still be found on eBay from time to time.  I like them because I find the colors (as well as the distressed look of them) very soothing.   I say that they are is slated to change very soon, though, because I have backed a Kickstarter deck called the Faunae Playing Cards, and I have a feeling once I have them in my hands I am going to be enamored. 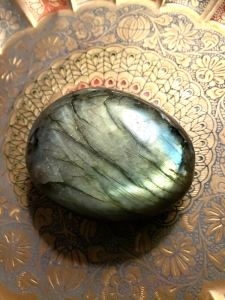 The Wild Card — Favorite Crystal — Labradorite has been my favorite crystal for as long as I can remember.   I connect really well with the energy of this stone (at least, as long as I avoid putting it on my forehead during meditation).  I find labradorite to be very soothing for me, and often meditate with a piece resting at my solar plexus, which can ease anxiety when I’m having issues in that department.  I’m a big fan of the large palm stones in particular, as I like that sense of “weight” with this stone, more so than any other.