So, I’m thinking maybe I need a little bit of accountability on my Self Care Saturday spread.  For the next month, I’m going to try adding it here, as although I’m doing the spread and reading it in the moment, I find that my motivation to write it down seems to be a bit lacking.   I’m hoping that by adding it here that possibly I will be able to get myself motivated into writing it down rather than just reading the spread in the moment and moving on.

These readings are (not usually) bearing down onto any one thing or event in my life, as the question used is asking for a more general outlook.  This is a self care exercise, and not meant as a predictive reading.

The question is… What do I need to focus on in the week ahead?  (Boring, I know, but helpful in pointing out where I might not realize I am neglecting or not realizing needs my attention.)

Body – Page of Wands – Be sure to approach caring for your body’s needs this week with a spirited and youthful mindset that is open to learning new methods and taking in new ideas.

Mind – Knight of Swords & The Death Card – Being aggressive in one’s thoughts and their expression will lead to endings and change that has perhaps been building for some time.

Emotions – Seven of Wands – Be willing to take some risks with your feelings and emotions.  Just be sure (and careful) of what comes out of your mouth and take the repercussions of speaking your mind into account first (see Mind).

Inner Spark – Two of Cups – One on one collaborations will feed the soul this week and keep the inner spark kindled and burning bright.

Moving Away From – Sedum / Discomfort – Testing limits and learning tolerance.  Last week I had a bit of an issue with tolerance where the helper was concerned.  Working through that may show to have created lasting change in how I see things and set in place good (new) methods to use again in the future.

Heading Towards – Cardinal / Authenticity & Aloe / Restore – By embracing my unique qualities and characteristics, I will be able to both foster my own store of energies, be refreshed from within, as well as better seated within my own skin. 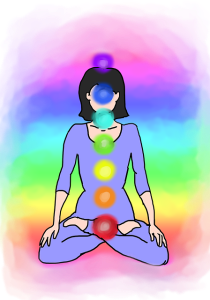 Today’s meditation was ten minutes and seventeen seconds, and was a simple body scan that started at the crown of the head and moved slowly through each body part, as well as the chakra associations involved with the center line of the body.

I often find that these types of meditations make it much easier for me to stay focused rather than catching myself in a constant tug of war between focusing on the breath and my mind beginning to wander.

All in all, I found the meditation very relaxing, although I’ve noticed that on a physical level I’ve been having some problems with my left hip just recently.  I’ll have to discuss it with physio/chiro doc when I go in next Tuesday.  It’s not the right side, so there’s no pins or rods or anything to worry about, but there’s definitely something going on on that side.

Today’s draw is the Three of Wands, which is a representation of growth, small gains and emerging progress, group efforts, and the realization of successes in the area of one’s passion, drive, and ambitions.

This card has shown up today to remind me to be nice, and grateful, for the help I have.  Specifically, in my business.   It is no accident that this card has appeared on the same day that my helper has come back from a week away.

As I mentioned yesterday, I’ve felt a little resentment lately about her presence in my home.  I don’t think that this has anything at all to do with her, but rather with the fact that I needed a little alone time and just wasn’t getting any.   Between L and J always being around, and the helper coming, and the housekeeper visits, I wasn’t really getting the alone time I need in order to stay balanced.

I realized this last night, and that along with seeking a more mindful and grateful mindset where she is concerned seems to have really helped.  I even taught her a new skill today.  Something that she can work on at home now and then when her school schedule is too strained to make it out this way as often as I’d like, or our schedules just won’t match up.    It meant sending some supplies home with her, but I’m okay with that in this case.

So there you have it.  Better use of that area of ‘group efforts’ and a more mindful, grateful attitude about her presence.

Today’s meditation was ten minutes long, and focused on being mindful of how we treat those that are closest to us.  It discussed how it is those closest to us that sometimes get the brunt of our bad days or dismal moods.

The guided meditation then walked through a practice of mindfulness and gratitude, to assist in keeping in mind just how precious these people are in one’s life.

The High Priestess card is a representation of intuition, spiritual knowledge, the subconscious, and divine feminine energy.  This card is a reminder not just to listen to your intuition, but to tune into your awareness of the yet to be discovered and the unknown.    She is a reminder that there is more at play in the world than what lies just upon the surface of our awareness.

This card’s appearance on a Self Care Saturday indicates that there are deeper motivations at work than what I perceive going on just on the surface.  I’ve been more tired than normal this week, and a bit reclusive from the world at large.  I even started resenting the presence of my helper a bit, which is ridiculous because 1) I’m PAYING her to be here and 2) she really does help me and my business.

Today I am being given a chance to get in touch with what’s going on beneath the surface and foster the temperance and tolerance, as well as the gratitude, that I need in order to move forward into the busy new week ahead.

Transitioning from June to July

Working For It Makes It Worth More