Today’s meditation was skipped.   I know.  I shouldn’t be skipping anymore but I’m confessing here.  I skipped it.   I need to get back on track with doing the meditation on a daily basis each morning.  I know it helps, and would probably help my current feeling of malaise that I’ve been struggling with.  So I need to just do it.

Today’s draw is the Empress card, which is traditionally a representation of a nurturing earth-mother type of energy, abundance, and the sacred feminine.

There are a couple of things that really stand out to me in the imagery of this card today. The first of which is how svelt the Empress is in this imagery. That just feels a little weird for me, but I think it’s not so much something the card is speaking to me as it is just a personal preference for the Empress to have a bit of meat on her bones.

The second, and far more relevant, aspect of the imagery that stands out to me today is the delicate curl of her hand as she cradles the glowing orb. The tilt of her head indicates regal authority, and yet she holds the orb with a gentle touch (indicated in the light curl of her pinky finger). She listens and cares, and the orb comes to her in trust.

LionHart’s #TheOctoberTarot #SeasonOfTheWitchChallenge Prompt
Question: Select your Death card and ask the Spirit World to guide you in something you could move past. Now draw another card. 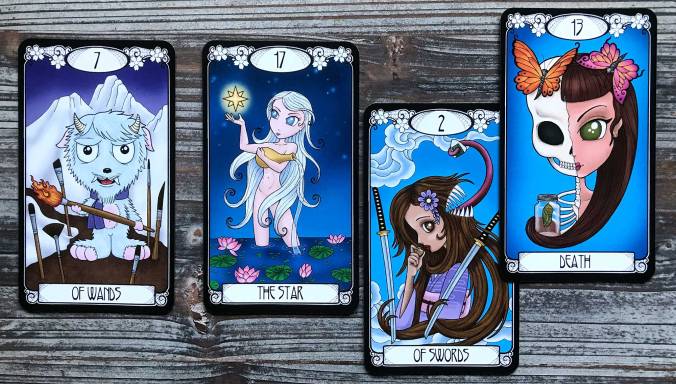 My Death Card is the Seven of Wands, which is about being so defensive all the time, indicating that this is something within myself that I need to work on changing.  Not in one fell sweep, but a little at a time.

When asking the Spirit World for guidance in moving past this issue, I was given the Star card, indicating that I need to approach this problem with a mindset geared towards hope while striving for an outlook of gentle balance and self-kindness.

The Two of Swords and Death card then dropped out as I was setting the cards down.  This added input indicates that this endeavor is not something that will happen on its own but rather is something I will have to make a choice to work on, and have the patience to let it unfold slowly.

#DiscordTarotholicsOct2020 Challenge Prompt
Question: What positive generational gift has been passed down to me from my ancestors? 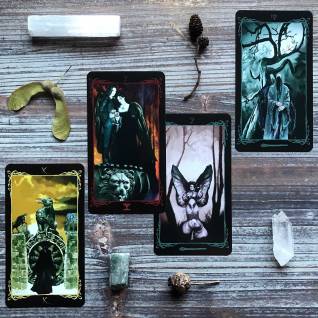 Reading Summary: The ability to take things in stride (Wheel of Fortune) and move you and your loved ones forward (Two of Cups atop Two of Wands) no matter the amount burden involved (Ten of Wands).

Take Away:  I would not have considered this a generational gift, and yet… perhaps it is after all.  The fact that I carry those that depend on me forward, continuing to keep them moving and keep them together even when things fall apart or the burden of it all feels too much is something… I have done and do today.  Is something my father has done.  And I imagine it is something that those before him did as well.

Perhaps this quality of being able to move forward even under that horrible weight of responsibility and the ever changing sands of life under my feet is hereditary after all, yes?   At least… that is what the cards are saying.

#MysticStarChallenge October Challenge Prompt
Question: How can I strengthen my connection with my Guides?

Reading Summary: My cards are singing to me that old Bill Withers “Lean On Me” song.

Lean on me, when you’re not strong
And I’ll be your friend
I’ll help you carry on (Two of Cups)

Take Away:  In a previous reading, there was a question about how can I honor my connection with my guides, which was to strengthen that connection.

The response to how to strengthen that connection is to use that connection. Don’t ignore it or leave it in the background, but actively reach for it and my guides, and use the tools at my disposal to ask for help and connect to them on a conscious level.  To actually ask questions, seek out their advice, and acknowledge them and their guiding hands.

#ConnectWithYourDeckChallenge by E Roebuck-Jones
Question: What is ready to be released from my life?

Reading Summary: Emotions (Lord of Grails) and intuition (The Priestess) taking the forefront (imagery in the Lord of Grails). That whole “steady as she goes” mentality (Four of Skulls) is great when there’s not a bombardment of chaos to deal with, and fun and games have their place (The Sun).  Unfortunately, none of that is going to help me in the couple of months ahead.

Take Away:  It’s time to release fun and play and relaxed methodologies as well as the distractions that I’ve been enjoying so much through the spring and summer (emotional growth, intuitive growth, etc).   There is a seven week stretch quickly approaching that is going to require setting all that aside for a bit.  Releasing all that is hard, but it needs to happen.

If people
could see
the cracks
inside me
as easily
as a broken bowl
would I be
tossed away
and forgotten?
or recycled
into something new?

The prompt for this reading came from one of my Discord servers and is as follows:
“Continuing our theme for the month, some questions to ponder this week…”

What is something in your life that you are struggling to put to rest?
Ten of Clubs

My need to overburden myself with craploads of stuff to get done. Each week brings me that much closer to my six week nightmare of the holiday rush, and with each week that passes I feel more pressure (from myself) to put more and more on my plate and try to get more and more done.

What do you need to do to finally move forward with that goal, emotionally?
Seven of Hearts atop King of Clubs

It’s all about the choices we make and owning your actions and drive. If I want to move forward into keeping myself from being overburdened, I need to lean into leading rather than slaving.  Taking control rather than allowing the vast array of things I feel that I need to get done to control me. In other words?  if I want to move forward emotionally with this, I need to take control of my obligation oriented emotions that drive me to overwhelm myself with work.

What do you need to do to finally move forward with that goal, physically and mentally?
Nine of Hearts

Understand that I don’t need that overwhelm and strife  in my life in order to feel like I’m succeeding.  That means stepping back from all these things that are overwhelming me and allow myself time to re-evaluate.  The world is not going to fall apart if I don’t pile these things on my shoulders, so maybe I need to just… not do it.   It’s okay to not do it.

How can you best celebrate the steps you are taking to put to rest this thing in your life?
Eight of Spades

Putting to rest the tendency to overburden myself is really hard.  To celebrate this, I need to move forward with my eyes closed.  That is to say… allow yourself to be blind to the pile of work that needs to be done for once.  Allow yourself to move forward with your eyes closed and do only what is needed instead of looking at the whole picture and everything I could pile on my plate.  Find freedom in wearing the blindfold.  Sometimes ignorance really is bliss.  This is one of those times.