At the moment, I’m playing catch up after having not kept up on my blog posts for a few days, so I don’t remember what the meditation was like today… or if I did it, to be honest.   I will return to updating about my meditation each day once I’m caught up with my posts again.

Today’s draw is the Eight of Pentacles, which is traditionally a representation of harmony and expertise built over time through hard work and the honing of one’s skills.  It’s about manifestation through these skills, and work with one’s hands to create one’s masterpiece.

What really stands out to me in the imagery of this card today is the pentacles themselves and their positioning within the air above where the woman kneels in her circle.   She has honed her skills of manifestation and is in the middle of doing a boon spell. She has worked on this craft, done all of the physical labor, and with the skills she has honed she has become strong enough to manifest abundance in a very physical way.

Today’s card is a reminder of what I can do… of the fact I have this ability.  Not to create coins out of mid-air, but rather to take an idea and make it into a reality.  To spin an idea into physical reality is a skill of creativity and creation, and a blessing to cherish and enjoy instead of simply exploit.

LionHart’s #TheOctoberTarot #SeasonOfTheWitchChallenge Prompt
Question: What should I keep in my mind when working with the other side? 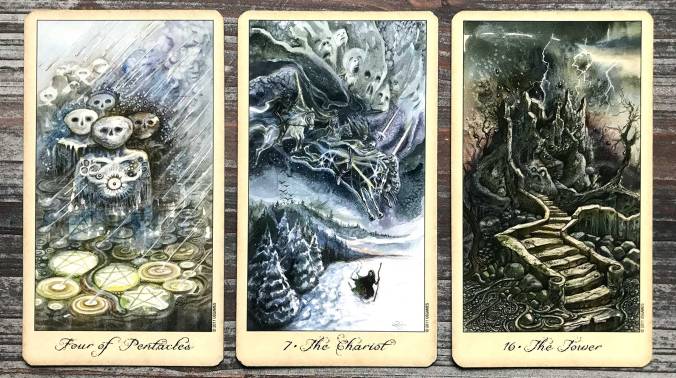 Reading Summary: Stay grounded (Four of Pentacles) and don’t linger (The Chariot) or things can start to fall apart fast (The Tower).

Take Away:  This is an echo of the reading I did yesterday that was a very similar question.  It’s a warning that when I am working with the other side I need to be in a grounded place of control.  In order to avoid chaos and disaster, it’s important to make sure I’m in the right place to be working with the other side, and able to get “in and out” quickly and smoothly while maintaining control.

#DiscordTarotholicsOct2020 Challenge Prompt
Question: What echos from the past are trying to resurface for me right now? 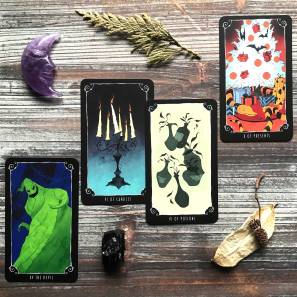 Reading Summary: Dad (The Devil and Six of Potions) trying to come back and tell me (Six of Candles under Six of Potions) what living my life should look like (Ten of Pentacles).

Take Away: This is the “cheer up and be a man” message that my father always had ready and waiting for me.  “A man” being a provider and the strong foundation of a fruitful family.  My father loves to try and rise up at this time of year and bring with him his whispers from the past, although I am grateful that these aren’t the worst whispers he’s ever shouted at me back when he was alive.

Still, with the fact that I feel like I’m lacking motivation this year, I really don’t feel like his input is productive, but more of a thorn in my already sore side.

#MysticStarChallenge October Challenge Prompt
Question: How do I embrace my message?

Reading Summary: Look at all the blue in these cards.  It spreads through the entire reading, and is only missing from the second card where pink shades tie in that card to the rest instead. Pink is independence.  Blue is calm and poise.

Card 1 – Hiding behind one’s independence in an effort to seize control and use it to create a solitary graceful strength away from the fear of other’s judgements.

Card 2 – Here is the solitary graceful strength.  Independence without censure.

Card 3 – Insidious whispers from outside sources.  Sitting atop one’s independence and begin resentful of those whispers, which creates negative feelings.

Card 4 – Very little independence.  That resentment from Card 3 has stolen the ability to fight back and the independence you seek.

Card 5 – Trying to seize control of a situation involving conflict. This situation feels out of control as you try to reign back in the independence lost.

Card 6 – Wearing your independence once more and at rest and ease now that it is once again back in your possession.

Take Away: The cards here indicate that to embrace this message of support I need to set myself free (second card) of the fear and worries (first card) of insidious whispers and influences (third card) sneaking up and taking me by surprise ambush (fourth card).

Whether I am calm and collected (last card), or fully aware and trying to seize control (fifth card)… what is coming is inevitable (water represented in both cards) and it is best to try and move forward into it with calm and poise (all the blue throughout the spread).

#ConnectWithYourDeckChallenge by E Roebuck-Jones
Question: What do past lives mean to me?

Reading Summary: You build up the physical within your life (King of Pentacles) which is then stolen away (Seven of Swords) as you are set free to join lost loved ones (Three of Cups) and the soul then can start again with prior knowledge it has earned (Knave of Wands).

Take Away:  This is about reincarnation.  It’s about how during our lives on earth, we have a habit of focusing too much on the physical.  Then when the physical is yanked away, we are left with a clear understanding of what’s left behind and what we’ve learned.  This knowledge is not conscious, but resides in the soul and is then carried forward into a new cycle.

The little snot
she likes to play
she hangs out with me
every day
even when
I try to work
she’s right there
to help
to meddle
or lurk. 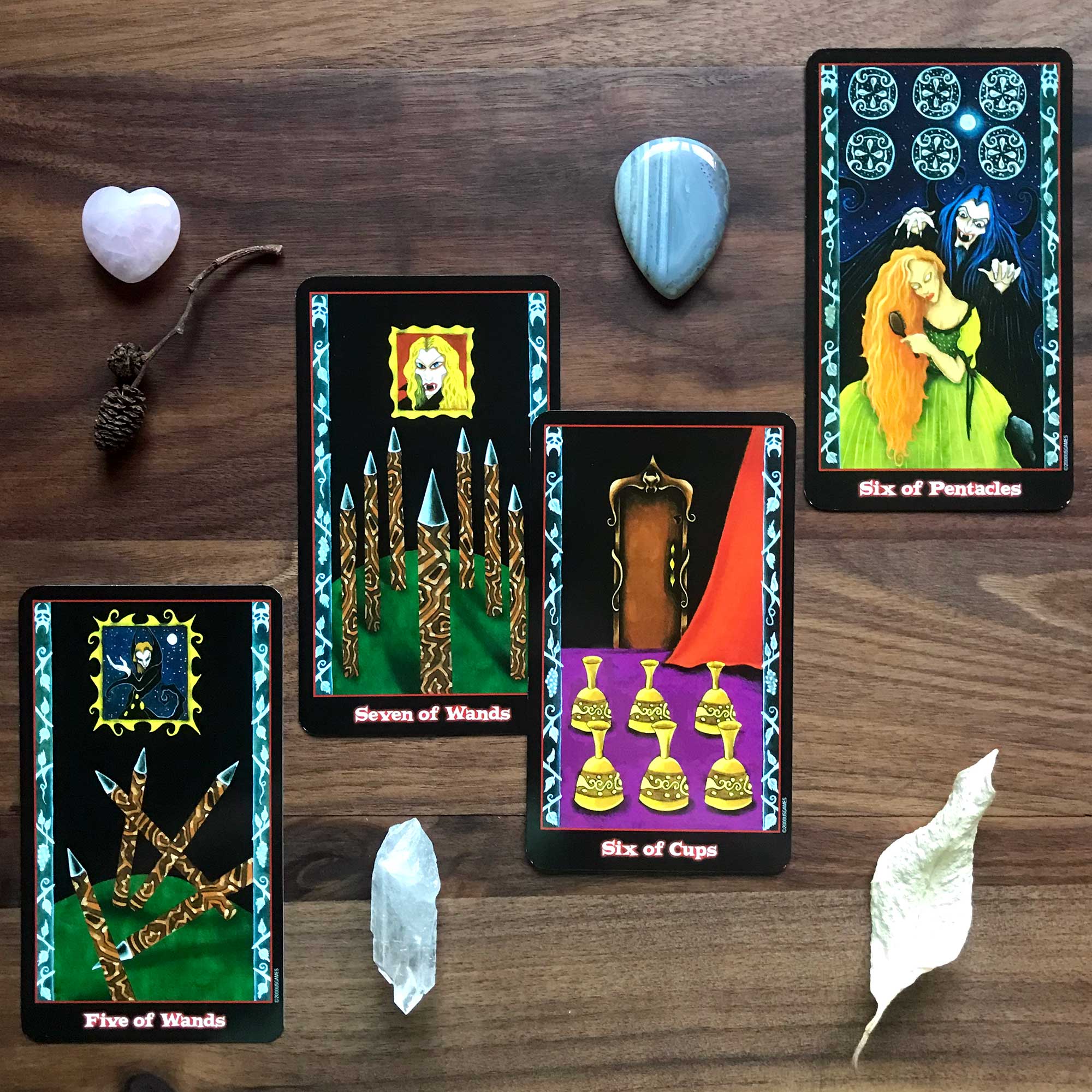 What is dying away, sloughing off, departing?
Five of Wands

My enthusiasm for the fight.  I haven’t had that spark of fire this season that usually rides me so hard.  That lack of enthusiasm makes it hard to push forward and has caused a slackening of motivation.

How can I lovingly support this transition?
Six of Cups atop Seven of Wands

What will this death make way for? What’s looking to be born or reborn?
Six of Pentacles

I really dislike this feeling of lack of motivation, but what this death is trying to make room for is a the ability to be more generous with myself and others.  This is about having the awareness of where I am, what I need from others, and what I can offer in turn.  Thus, putting me more in touch with what’s going on around me instead of within my own life from only my own perspective.