Pull (at least) three cards use them as the foundation to write something (real or fictional) about adversity and/or triumph. 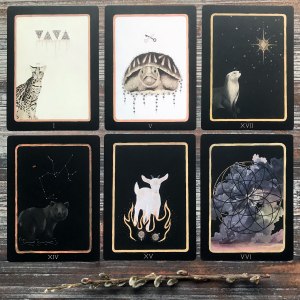 The Magician – There was once a young boy named Manah that thought he knew everything and was indestructible. He was smart and strong, and believed that he could handle anything that came his way, no matter the source. Even though Manah was young, he believed he had everything he needed and was prepared for anything.

The Hierophant – The wise man of Manah’s village warned him that one day he would run across a situation that he could not handle on his own, but Manah refused to listen.

The Star – Instead, Manah decided to strike out on his own. He packed up his few belongings and left his village with high hopes, and began on a journey to travel the world and see many sights.

Temperance – The great wise spirit of the sky looked down upon Manah with patience for his youthful foolishness. She decided to test the boy, and see if he was indeed ready to strike out on his own.

She sent down from the stars dreams that whispered through his mind as he slept that first night.

The Devil – In his dreams, Manah was greeted by a beautiful woman that stepped out of the flames of his campfire.

She was kind and gentle, and he fell under her spell. She gave him attention and asked nothing in return, and in his dream he became attached to her. As the dream progressed, though, this woman began to ask for small favors. Little things at first, and then something a little more.

Soon she was asking for things that went against his nature, and against what he knew was right or wrong. And yet he was no longer able to say no.

Justice – When Manah awoke the next day, it was late in the day and he had overslept by hours and hours. His fire had died down and animals had come and stolen off with all of his food and some of his supplies.

He realized, through his experiences both in the dream and his awakening to reality, that perhaps he was not as wise as he thought and returned to the village and back to the tutelage of the village’s wise man.

One thought on “Weekly Creativity Prompt – Adversity and Triumph”