So today I thought I’d share how swaddle my decks that don’t have a box to call home.  This happens a lot, as I am NOT a fan of the too-big boxes that a lot of decks come in.  If a deck comes in a tuck box, that’s great and I’m okay with that (until it eventually falls apart), but those great big oversized boxes are just a waste of space in my opinion.

I’m also not a big fan of deck bags, because I feel they are not secure enough to protect the deck from damage.   So instead, I swaddle my decks using a piece of cloth called a “fat square”.    A fat square is a piece of cloth usually sold for quilting purposes.  It usually measures anywhere from 18″ x 18″ to up to 22″ x 22″.   Most of those I have are 18″ x 22″, which is not square, and yet it’s still called a “fat square” for some reason.

I always use 100% cotton, and choose fabrics that I feel will fit the deck in question.  In the following example, I am wrapping my trimmed Everyday Enchantment deck.

1. Lie the fabric out flat and place the deck in the lower left hand corner.  Leave enough room on the left side and bottom so that both edges can fold up over the deck when the time comes.

2. Fold up the bottom part of the fabric over the deck.

3. Roll the deck up one flip, keeping it snug as you roll it into the cloth.

4. Fold the right edge of the cloth up and over the deck.

5. Roll the deck one flip to the left, making sure to keep the fabric snug around the deck as you do so.

6. Fold the right side up over the deck.  You can then fold back excess or wrap excess fabric around again if there is extra fabric to deal with.

7. Fold in both sides of the remaining cloth.  This is so that it doesn’t stick out and become messy when finished.

8. Roll the deck over into the remaining cloth so that there is only a little flap left to deal with.

9.  You can see in this photo where that little flap is going to go.  You want to tuck it into the pocket that is created by the cloth.

10. You can see here how it looks once that remaining piece of fabric is tucked in place.

And there you have a swaddled deck, wrapped up nice and neat.  It’s safe, secure and snug, and is easily able to store and stack, as well as safe to toss in a bag without worrying it’s going to get bent or dinged or damaged.

It takes a little practice to get it nice and snug, but I’ve found that most decks (other than some of the really large ones) fit in the ‘fat squares’ of fabric really well. 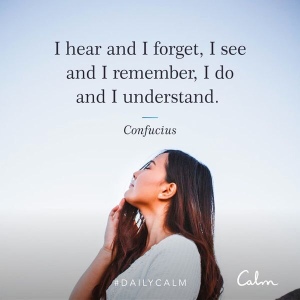 Today’s meditation was eleven minutes and sixteen seconds, and focused on the three types of learning.  These styles of learning are through the word of others, through your own research, and through actually doing.  It discussed how each type has its place in the process of one’s development of new skills, but it is the last of the three that really cements home changes in one’s skills and abilities. 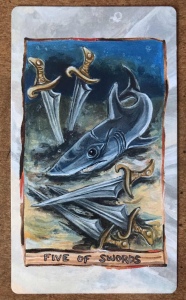 Today’s draw is the Five of Swords (the Mako Shark), which is a representation of trials, tests, hardship, conflict, and struggles in the area of one’s thoughts, logic, communication, instincts, intellect, and challenges.

In the guidebook for this deck, the Mako Shark’s keywords are dominance, power, fearlessness, drive, cunning, and endurance.

This card is really good for today, and I would like to share a quote from the Journey into the Hidden Realms book that demonstrates perfectly how I see the appearance of the Five of Swords in today’s draw.

“… while things look chaotic and dangerous, they aren’t as bad as you are making them out to be…. just let the situation play out naturally, it’ll blow over soon. Trying to take action now will only bring regrets.”

This is exactly right for today as I learned yesterday (along with multitudes of other sellers on the site) that Etsy has decided to completely revamp their advertising platform.  This is a platform that has worked VERY good for me over the years, and what they are incorporating into the new platform involves LESS control as well as the inclusion of a venue that has never worked well for me at all.  Because there are less controls, this means there’s no way to opt out of that advertising venue without curtailing advertising through them entirely.

I’ve been mulling over what I want to do about this, as I definitely have issue with a number of the changes.  I needed guidance, although I had not yet chosen to turn to the cards for it.   The cards, though, stepped up to provide that guidance regardless.

For the time being, I will take the “wait and see” route.  Once the dust has settled, then I will go back and review my options and make a more educated decision.

Hyunta… Yeah, You Heard Me

The Great Glyph of the Sidhe

Abandonment vs With Abandon