Today’s meditation was ten minutes long, and focused on the positives that come from being wrong.  It was a discussion on how it is not in being right that we learn and grow, but in being wrong.  In those moments, we are given an opportunity to learn, and the potential to grow. 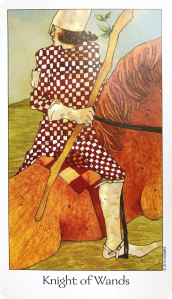 Today’s draw is the Knight of Wands, which is a representation of a beta energy, person, or personality in the area of passions, drive, and inspiration.  Beta energy is “go-getter” type of energy, and as such, Knights in the tarot include the energy of action. This energy housed in the Suit of Wands is a indication of motivation, and going after one’s passions with enthusiasm.

It’s Thursday, which is an order prep day, and the Knight of Wands is a reminder to tap into my passion and drive concerning my business, and my enthusiasm and enjoyment in what I do.

The Knight of Wands says to not just trudge forward, but instead bound enthusiastically forward with purpose.

One thought on “Go Get’em Cowboy”