Tarot of the Hidden Realm – The imagery of this card is all about a flagging of confidence, a sense of curiosity, and a moment of uncertainty.  Antlers are unwieldy in moments of vulnerability as the figure explores the barren ground on hands and knees.

There is also determination and strength.  She is not lying down and giving up, but continues to move forward, to seek more, and find her way. 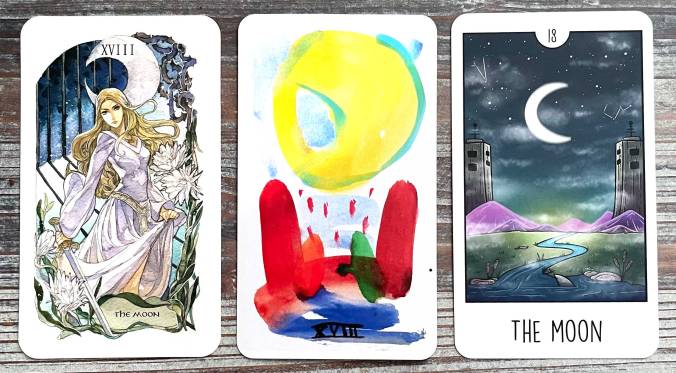 Tarot for Middle Earth – Like the Tarot of the Hidden Realm, the focus in this card’s imagery is not on the moon itself, but rather on the figure that works to make their way through a dark landscape of shadows and darkness. Here in this card there is a sense of empowerment over doubt and uncertainty.  Her posture and the sword she carries indicates that although she walks through shadows and a landscape of illusion, she is prepared for what may come.

Anonymous Tarot – Abstract and vague, what stands out strongest to me in this card is the moon itself.  Although this imagery is very reminiscent of traditional RWS imagery, the moon dominates everything and appears to be bleeding. The amount of red in this card speaks to me of fear, and of leaving a place of calm and security (the blue) to step into that place of fear in order to follow the beacon of the moon above.

Adventure Arcana Tarot – Here again we see a very classic imagery, and yet the contrast between domesticated and wild is missing in the lack of dog and wolf.  Although the crustacean is also missing, we are still able to draw the meaning of it through the shift from stream to the appearance of a path, as if we are pulled out of the dark water of the subconscious to tread upon the moonlit path through uncertainty, forsaking the security that the towers offer to follow the guiding light of the moon above.

One thought on “Weekly Creativity Prompt – The Moon”

Motivation Comes In All Forms