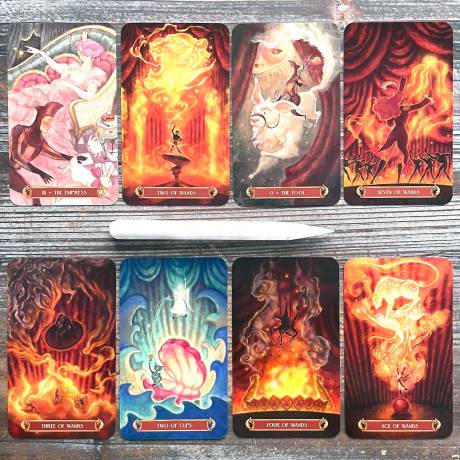 Card I Relate to Most Strongly – Ace of Wands – So much inspiration and so little time. There are so many things I want to learn and explore, but there’s never enough time.  Every single day, more new ideas and new interests stir to live inside my mind and heart, and I want to explore every single one of them.  Picking and choosing between them is hard when they all old so much potential value either monetarily, or through the pure enjoyment of discovery and exploration.

Card I Relate to the Least – The Fool – I am too cautious a thinker to relate well to this card.  Although I often move at lightning speed to seize opportunity or get things done, there is no carefree abandon in this speed. Instead it is controlled precision. Tossing all cares to the wind and being carefree and innocent just doesn’t feel like it is a part of my nature.  In fact, about the only time it ever happens is when I’m playing in the liminal spaces within the rainforests here in the PacificNW.

The Empress – I often think of Z when I see this card. As my mentor growing up and throughout my adult life, she has often held the place of nurturer in my life.  Sometimes The Empress and nearly always The High Priestess… it turns out that it’s her mother that has stolen the Empress role from her of late.  Now they seem to somehow share this role together in my mind.

Two of Wands – This card made me think of the second episode of the Rings of Power on Amazon Prime. It’s all about direction, planning, and the course of actions we plan to take in our lives.

Three of Wands – Time to Pretend by MGMT
https://youtu.be/B9dSYgd5Elk

Two of Cups – It is the timeless friendship between Morpheus and Hobs in the series The Sandman on Netflix that this card reminds me of. An immortalized human and the god of dreams strike up an unusual friendship by meeting once every century at the same tavern again and again.  It’s an unlikely friendship, and yet it shows how such relationships can grow from just the seed of companionship between two people.

Four of Wands – At the end of Ambrose Ibsen’s book “The House of Long Shadows” the main character, possessed by a myriad of spirits, is walled up into the home he had been renovating in order to keep all those entities trapped within that place.  The book then takes a look at the man’s spirit life afterward, and how the tree he’d thought smelled so disgusting all this time throughout the book now smells sweet and “like home”.  He found peace in the house, even if it was after the horror of how he died, and the scent of the callery pear tree now is a celebration of that peace and home he’s found.

One thought on “Weekly Creativity Prompt – Relating and Relations”

One Day at a Time, One Step at a Time

📆 Transitioning from November to December

Weekly Creativity Prompt – Manna From Above