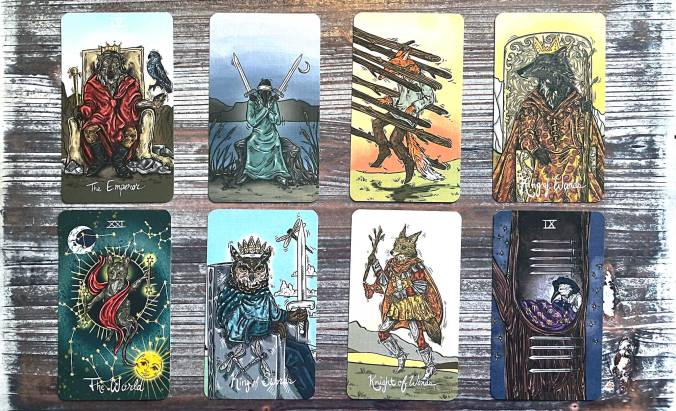 Of the eight cards now sitting in front of you, which card do you relate to most strongly and why?

Two of Swords – So many of the cards in this collection are echoes from my past and the way that I treated myself before I got to a point where I had to acknowledge that I was killing myself and things needed to change.  At this time in my life, out of these eight cards, it is the Two of Swords that I relate to the strongest, for it speaks to me of the constant weighing of my old ways and my newer healthier ones.  The many, many choices that I make every day, again and again, between that old path and this new one I’ve chosen.

Of the seven cards now left sitting in front of you, which card do you relate to the least and why?

Eight of Wands – I think that this is the card I relate to the least at this time in my life.  I feel like everything is moving in slow motion these days.  I know it’s because I’m used to moving much faster and pushing myself much harder, and that this slower and more healthier pace is much better for me.  But sometimes?  It doesn’t feel like I’m moving at all but instead standing stagnant in the mud.  Not the case, I know… but that’s how it feels sometimes.

Assign a real person in your life, a fictional character, a movie, a book, or a song to each of these six cards and then tell us why you made the choice you did for each.

King of Wands – The man is a fucking marvel of ingenuity.  He once said, at the age of eight, that he would make his first million before he turned 20.  Not only did he do it, but he made his second before turning 21.  Singularly focused, everything he has and everything he does goes towards the goal of accumulating more.  It isn’t the wealth that drives him, no matter how much he accumulates.  It’s just that within him is a driving force that has to be directed somehwere and this is where he chooses to direct it.  This is why he doesn’t stop. He has no plans to retire and take things easy.  He can’t… because there’s just too much fire inside and it has to go somewhere.

The Emperor – I’ve selected Daechwita by Agust D as the song that matches the Emperor card. The song, and especially the music video for this song, absolutely fits this card, as they are both about not just power, but what we do with that power over others, and how we use that power to lead. If you would like to better understand the music video, DKDKTV did an excellent explanation video about it.

King of Swords – This card speaks to me of the 2003 movie Paycheck with Ben Affleck and Uma Thurman. Although the main character in this movie runs around lost acting like a spoiled brat through a good part of the movie, when the movie finally comes together, what you see is a mastermind plan.  Perfect strategy and leadership, even with those difficult to lead or convince. Everything moves forward to a predetermined plan, executed with precision to the desired outcome in the man character’s favor.

The World – She floats.  Seriously. I’m not kidding. It’s not that she moves through life with her head in the clouds, but rather that she’s found that place within herself where life’s energy flows and she rides those currents smoothly, accepting each moment, each experience, and like air flowing through leaves or water over rocks, she adjusts to each moment, learns, and continues on.  Ever evolving as she takes each step in life, those gauzy skirts swirling around her ankles only making me that much more certain that her bare feet are not actually touching the ground but skimming over it.

Nine of Swords –  X Amount of Words by Blue October fits this song to absolute perfection. The Nine of Swords is all about mental anguish and anxiety.  It’s about struggling with a mind that is not fully in control, and the lyrics to this song (included in the video I linked) match that theme exactly. They were made for each other.

Knight of Wands – For this card, I chose the 1998 movie City of Angels, with Nicolas Cage and Meg Ryan. In this movie, the angel Seth is so focused on what he wants that he is willing do do anything to go after it, no matter the consequences.  He is so enrapt with the concept of love that he literally falls from heaven in order to experience it for himself… only to experience it just briefly before it is taken away. The end of this movie kills me, and I’ve stopped watching the ending and instead stop it at the cabin when they’re happy and together.  That said?  This story holds within it the soul of the Knight of Wand’s passion, determination, and drive for what they want most.

One thought on “Weekly Creativity Prompt – Relating to Eight”

📆 Transitioning from July to August

Sit With It For a Bit