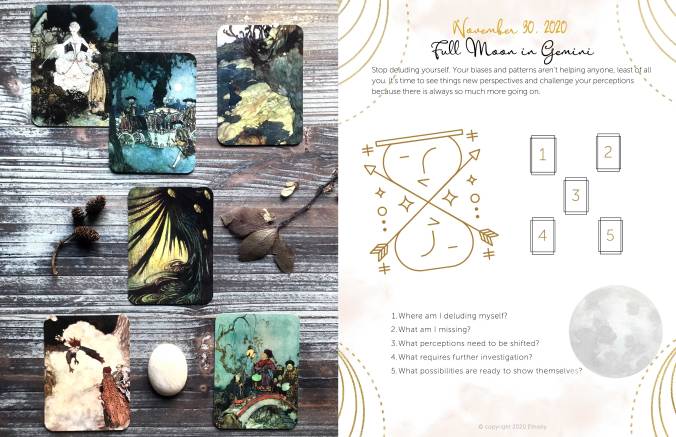 Today is the full moon, and like all new moons and full moons, I did a spread aligned to the moon’s current themes as a part of my recognition of the moon’s cycle and influences upon us.  Today’s spread is brought to you by Ethony‘s Tarot By the Moon series.

1. Where am I deluding myself?

Happily ever after doesn’t just magically appear no matter how much you want it to.  Cinderella may have had a fairy godmother, but you on the other hand have to steer your own chariot.  Although the summer was very relaxing and the fall was filled with procrastination and lack of direction, you’re no longer in either of those seasons any longer.  No time to dawdle anymore.

The wind blows at your back and the water laps at your feet.  They usher you forward and all you need to do is ride the energy they provide. You may have to do for yourself, but the chaos will make its own energy for you to ride if you open yourself up to it and let it sweep you away.

3. What perceptions need to be shifted?

What others see and think doesn’t matter. Don’t use your perception of their judgements as an excuse to swirl darkness into your life.  Be kind to yourself instead and allow light to shine through the darkness that would otherwise be allowed to spread through your insides.

Open your eyes and look around.  A threat comes from the east and it needs your attention.  You have the capability of deflecting the worst of it from landing and wreaking havoc, but only if you keep your eyes open for the attacking harpy that’s coming your way.

5. What possibilities are ready to show themselves?

This holiday rush is providing me the opportunity to see just how much illumination and light that a bit of extra optimism can bring into my life. The little seed of light that was available to me and fostered by me in the summer months is now ready to glow brightly, but will only be as bright as the energy that I feed into.  Don’t forget to feed that light even when things are at their busiest and most chaotic.