Today’s meditation was non-existent yet again.  Just too much to do, too many places to go, and when I finally got a moment to stop and take a breath, the nap was way more needed so I went that route instead.

Today’s draw is the Ace of Swords, which is traditionally a representation of the seeds of a beginning in the areas of one’s intellect, education, aspirations, and communication with others. This often translates into themes to do with new areas of research, new methods of communication or new people to communicate with, new jobs or projects where you are learning something new, etc.

What stood out to me the strongest in the imagery of this card is the moon phases that are etched into the blade, which for me represents a specific period of time (29.5 days, to be exact).  As my readings are so often predictive and this one feels the same, what I see here is in reference to the car accident I had on Wednesday and the great deal of communication going on between myself, the insurance company, my medical support team, and my attorney.

Combined with the (oh so very cute as fuck) Thera-Pets card for today, what I see here is a personal message indicating that there is going to be about a month of pretty intense communication before anything gets resolved.  Which… is fine.  I’m not particularly fond of spending time dealing with all these people, but I have a good support structure in place and I know that with some patience everything will get dealt with and cared for.

The Marching Into Darkness Tarot Challenge Prompt
Question: If my shadow could talk, what would it say to me?

Reading Summary: My shadow would say “I want to be happy and secure (Ten of Pentacles) and a part of the process and path (Ace of Wands). Give your inner critic (Judgement Rx) a break (Four of Swords) and make me a priority (King of Wands).”

Take Away:  My shadow does not want to be put back in the box and buried in the dark.  It is reaching for the light just as I am in my efforts to rise out of my depression, except in my shadow’s case it was imprisoned for much, much longer. It wants to work on finding balance and happiness and a path forward that is less about nagging at the self and self-abuse, and more about prioritizing self-care… including caring for the shadow within.

#DiscordTarotolicsMar2021 Challenge Prompt
Question: What area of my life is requiring too much sacrifice? 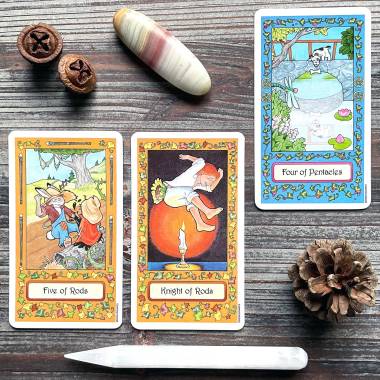 Reading Summary: Too much “leaning into” my sense of “my way or the highway” (Five of Rods).  Don’t be impulsive or over confident (Knight of Rods), but instead take things slow and make sure you aren’t being fooled into a false sense of security (Four of Pentacles).

Take Away: I’ve been over-compensating in trying to pretend I’m not worried or stressed concerning the business and the changes that I’m adjusting to in that area.  Although It’s good to be alert and aware, and keep track of things, I need to step back and be less invested here… and less stressed and worried as a result.

By allowing myself to sink too deeply into these issues, I’m becoming too rigid and may find it difficult to adapt when I need to or discern between what is real and what is all in my head.

As I mentioned above, I took a nap.  It’s an orders day, so that’s not something I would normally allow myself, but I was so tired when I got home from the body shop and doctor that I let myself nap for about two hours.