I’ve been sitting on this post for quite some time, because originally?  I wanted to do pictures of all of these decks.  But it turned out that the pictures were just becoming a HUGE pain in the ass, so I revised the idea and will be sure to add links to each deck so that you can see what they are, but I’m not going to bother taking pictures of them all. 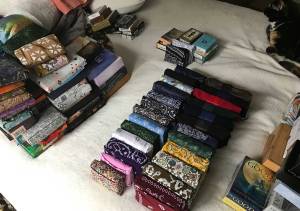 Luna (upper right corner) assisting me in sorting and organizing my decks to be stored in my trunks.

The original theme for this post was created by Simon over at The Hermit’s Cave, where he did a video a few months ago about his backup decks. I had thought that I don’t often purchase back-up decks until I started writing this post. Now? Lets just say it started out with a few decks that I have done so because the deck was just TOO important to me to risk ever being without… and then kind of shifted from there.

In fact, I only have…. hm, three?  No, four, I think.  That is to say, back up decks that are very literally and very much bought -as- back up decks.

Gypsy Witch Fortune Cards – I have the original 1970s version that was given to me as a child as my very first divination deck, and then I also have an old 1920s version that I picked up more recently.

Sasuraibito Tarot – This one is because I already owned a copy and was then gifted a copy by Z a few months after I’d already bought it for myself.  I held onto the second one because I really like the deck so… why not?

Tarot of the Hidden Realm – I’ve mentioned this deck many, many times.  I connected to it from the moment it came out of the box and that connection has only gotten stronger over time. I have a second copy of this deck (and TWO extra guidebooks for it) because I love it so much.

Tyldwick Tarot – I have two of this deck for the same reason as the Tarot of the Hidden realm.  It’s because I love it so much.   And, because it speaks to me in a way I’ve not found any other deck has ever spoken to me before, and I find that it communicates well with ALL of the various Fae themed decks I have.

And, soon to be added, the Stolen Child Tarot, which has quickly stolen second place right behind Tarot of the Hidden Realm as my all time favorite deck.

The trunks where I home the majority of my decks.  These are located in my bedroom on the far side of the bed beneath the windows.

Aside from those mentioned above, I also have a few that I have two decks for, but it is because I have done some kind of alteration to the deck that has significantly changed how I use it or how it reads, and yet still wanted to retain one for myself in its original format as well.   These include….

Arthur Rackham Oracle – Essentially, I took both decks and picked out the best artwork for each card, added in the cards from both decks that were different, and thus created a giant deck.   With the repeat cards that were left over, I then trimmed them down to just the image and use them as an intuitive oracle deck.

Fairy Lights Tarot – Both of the versions of these I have trimmed, but in different ways.   The first one, I trimmed off just the sides of the deck.  This is because some of the cards fit together to make panoramic views of a larger picture and the side borders made fitting them together impossible.  The second deck I have trimmed down to just the images, and use them as an intuitive oracle deck.

John Bauer Tarot – I have an un-modified version.   And then I have one that I’ve removed all the borders and text, cutting them down to just the images and edging them in multiple colors to match the artwork on each card.  Like the others in this group of decks, I use the trimmed down version as an intuitive oracle deck.

Nicoletta Ceccoli Tarot – I have three versions of this one.  I have an un-modified full size deck, I have the mini pocket size of this deck, and I have a third one that I have trimmed down to just the images to use as an intuitive oracle deck. 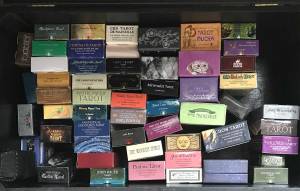 The interior of one of the trunks prior to finishing filling it up.

Ok, so then there’s a third category here… because I also have a handful of decks that I have more than one of that are not back ups, but different versions of the same deck.  These would include…

Centennial Smith Waite – I have three versions of this one.  That includes the borderless edition, the edition with borders, and the tarot-in-a-tin pocket size.

Earthly Souls and Spirits Oracle – I have this one in both the large 2nd edition format, which I use as center focal cards for wheel spreads sometimes, as well as the tarot-sized 3rd edition of the deck.

Good Tarot – I have the official mass-market copy, and a mini bootlegged copy from China.

Halloween Tarot –  For this one, I have it in the full sized version, as well as in the tarot-in-a-tin pocket version.

Morgan Greer – Like some of the others in this section of the list, I have this deck in the full sized version, as well as in the tarot-in-a-tin pocket version.

Mystic Faerie Tarot – I have both the bordered edition, as well as the borderless edition.

Roots and Wings Oracle – I love this oracle and have been loving it for a while.  I originally bought the full sized version, and then later ordered the mini size in a tin when she released it earlier this year.

Sun and Moon Tarot – I have it in the full sized version, as well as in the tarot-in-a-tin pocket version.

Universal Waite Tarot – Again, I have it in the full sized version, as well as in the tarot-in-a-tin pocket version.

Universe Has Your Back – I have the official mass-market copy, and a mini bootlegged copy from China.

Wild Unknown Tarot – I have the official mass-market copy, and a mini bootlegged copy from China that I plan on coloring in to see if I can connect better to the cards with them colored.

Wildwood Tarot – I have two official mass-market copies of this deck (one that’s trimmed and one that isn’t), as well as a mini bootlegged copy from China.

Witches Tarot – I have the original 1989 mass market edition, and I have a mini bootlegged copy from China.

Okay so… I think that’s all of them.  I’ve considered picking up a second copy of the Llewellyn Tarot, as I am planning on trimming the one I have down to just the images, but I haven’t pulled the trigger on it yet.

3 thoughts on “#BackupDecks (non) VR to The Hermit’s Cave”

The World Spins On, Regardless

Transitioning from November to December