Today’s meditation was fifteen minutes long and was attached to the end of my yoga/physiotherapy practice.   I went up north today to check the mail and I didn’t want to allow myself the chance of falling asleep during or after my meditation, so it was a better idea to incorporate it into my yoga practice instead of doing it on my own stretched out and folded up into a couple of stretches on the bed.   The floor is far less comfortable, after all, even with a yoga mat laid out.

Today’s draw is the Emperor card, which is traditionally interpreted as a strong “father” energy or “boss” energy. This has to do with themes that involve being in a position of authority, or possessing a sense of stability, structure, and established control.

What really stands out to me in the imagery of this card today is the banded agate rocks that the buck stands upon.  Banded agate has a lot of meanings and uses but it is most commonly known as a healing stone that reaches into the levels of the mind, body, and spirit to unify as it heals.  It is also a powerful against psychic attacks directed through harmful negative energy.

The traditional meaning of this card blended with the qualities of the banded agate provide me with a message about not allowing others to drag me down.  Keep my energy both positive and authoritative as I move through my day today and things will continue to go smoothly.  Step off this path… and you may fall into a tangled mess below.

#TarotForGrowthMay Challenge Prompt
Question: How can I bring more alignment with self into my life?

Reading Summary: Bring more restraint (Temperance) into both the juggling of my responsibilities (Two of Rocks) and allow for more acceptance (again, Temperance) of fickle nature of change (Wheel of Fortune).

Take Away:  The advice here is to add a little extra space to my plate… not to be filled up with things to do, but to leave a little bit of “wiggle room” in my schedule and in my pile of responsibilities so that when I need a little extra time and space, I have it on hand.  This is really good advice, and oddly similar to advice I gave in a reading to someone else earlier today with an entirely different question.

The truth is, though, that I do have a habit of piling so much on my plate that then, when I need a little space, I’m so overwhelmed with commitments and responsibilities that I can’t find it.   This starts a cycle of negative reactions and struggles that results in burnout (where I end up having to drop the ball on damned near everything) and then a recovery period after burnout. 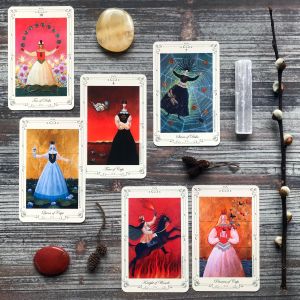 There was once a young fox who thought he had everything figured out.  He lived in a small forest filled with the security of family and friends, a plentiful amount of food (Ten of Disks).

So much so that the fox was able to be picky with his meals and often ignored the advice of his mother (Queen of Cups atop Four of Cups) to eat a diverse diet, instead choosing to eat his favorites again and again.

Over time, because the young fox had a sweet tooth that caused him to eat far too many berries and not enough meat, he became very sickly and unwell (Seven of Disks).

Then one day he saw his sister chasing after a rabbit. He was so fascinated by the joy she displayed as she ran and played (Knight of Wands), bounding after the bit of fluff this way and that, that he realized the error of his ways and was inspired to follow suit and learn from her how to take care of himself properly (Princess of Cups).

#ConnectWithYourDeckChallenge by E Roebuck-Jones
Question: What are my relationship deal breakers?

Reading Summary: Irresponsible with money (Page of Coins Rx). A bossy know it all (The Hierophant). Uncertainty and lack of direction (The Moon).

Take Away:  I’m actually surprised that stupidity isn’t up there. *Chuckles.*  Though, all of those things listed in these cards are definitely deal breakers for me.

1) I really can’t stand someone that is ultimately so irresponsible with their money that they can’t cover their responsibilities.  I see this behavior all the time and, while I don’t mind it in others as a whole? It’s not something I could ever saddle myself to, as I am far too focused on stability and security to tolerate that behavior when it might influence my own situation.

2) There is a big difference between someone who is dominant and wise…. and someone that’s just bossy and an ass.   I’ve found that although I thrive in relation to the first, and I would not be able to tolerate the latter. I’m too independent to allow someone with arbitrary demands have control over my life.

3) By the same turn, I am also too independent to tolerate being close with someone that has no clue what the fuck they think or feel or want.  This type of behavior drives me nuts, and it is something that I have often encouraged others to grow out of over time.

Heather Carter on YouTube put together a series of prompts titled #31DaysofWitchcraft that she’s been working her way through since the beginning of May. I really like this idea, but I can’t handle the responsibility of any more daily posts, so I thought that for the next few weeks, I would do one (or a few at a time) for the end of week “My Pagan Perspective” posts. This is the first installment!

1. Is your witchcraft secular, spiritual or religious? How does this influence your practice?

My witchcraft is a blend of secular and spiritual.  I revere the energies of the elements as well as those of creation, evolution, and balance.   I incorporate these into much of my ritual witchcraft. At the same time? Much of my spellcraft is based not on faith but upon the secular qualities of the ingredients incorporated into the spells.

A secular example, I might imbibe  a cup of mint tea with magical intent for healthy digestion before giving it to my sister when her stomach is upset.   The magic is there within my will and my intent, which are pushed into the brew when it is made for her…. but, it is boosted by using the right ingredient for the purpose, which leans the ingredient into the energy of my intention.

Which is different than say… as a spiritual example, where I might plan a ritual that involves inviting the elements and those energies I revere into my ritual and my spellcraft, pulling them in to include them for not just their blessings, but also their power to be lent into my intent.  This is a conscious act to include a spiritual aspect that is not present in the first example.

2. Do you work with any specific deities as part of your practice? Why, or why not?

Nope.   My sister and I were raised Wiccan, and in that practice we included the god and goddess into our faith and our witchcraft.   But once I moved out of my parent’s home, the deity aspect was the first to go for me in adjusting my practice to better fit me personally.

It’s simply not an aspect that has ever really connected for me.  I don’t deny the concept of deity, only that it’s not a part of my own practice.  I’d never say “there’s no such thing as Loki, or Diana, or…. any of them” because honestly?  I don’t think that’s true.   I just know that for me, it’s not what feels right.  For me, a much better fit are the energies of creation, evolution, balance, and the elements.

3. What area of your practice are you currently focusing on, if any?

At the moment I’m pretty much in a “comfort zone” of sorts.  I have my divination practice and clients.  I have my daily devotionals and day to day spellcrafting.   But honestly?  I’m not researching or digging at this time.  A huge majority of my witchcraft (and pagan path, for that matter) is instinct and intuition.

When something strikes my interest or curiosity, I delve in and sate that need to know, and may or may not incorporate something into my path if it resonates strongly with me.   But there’s very little “study” going on… and other than my studies in plants?  There never really has been.  I’m comfortable.  I’m happy.  And I’m not looking to really “fill in any gaps” or change my path to something else as I don’t feel any lack of satisfaction in relation to the path (spiritual or witchcraft related) that I’m currently on.