Yesterday was the second Full Moon in Aquarius, and like all new moons and full moons, I did a spread aligned to the moon’s current themes as a part of my recognition of the moon’s cycle and influences upon us. Today’s spread is brought to you by Ethony‘s Tarot By the Moon series. 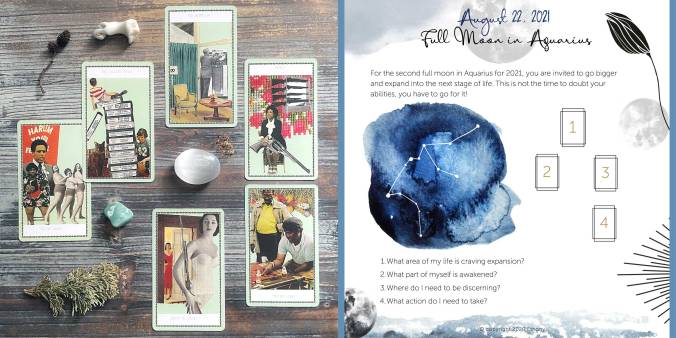 1. What area of my life is craving expansion?

The Magician – You crave developing new skills and testing them. You crave using your abilities to their fullest to achieve your dreams and goals. To prove you can do it. The key is to find a way to do this in a healthy way instead of in the self destructive ways you have done it in the past.

2. What part of myself is awakened?

The Tower atop Seven of Wands – The awareness that life isn’t fair no matter how much you want it to be. Sometimes things fall apart no matter how hard you rail against the unfairness and injustice of it all.

3. Where do I need to be discerning?

Force – Choose your battles wisely. There’s no point railing against the things that you can’t change, better to use your inner strength to stand tall even when these things happen.

Seven of Coins – Don’t allow your rise in anxiety to send you into a spiral, and thus cause you to begin to rush and push yourself harder. You need to continue to take things slow, and consciously focus on that slow path of growth for a while longer.

5. Message from the Ancestors.

Queen of Swords – It’s okay to be salty about what happened. That recent ordeal weighs heavy on your mind, but don’t let it drag you down.

One thought on “Second Full Moon in Aquarius – August 2021”

📆 Transitioning from July to August

Sit With It For a Bit