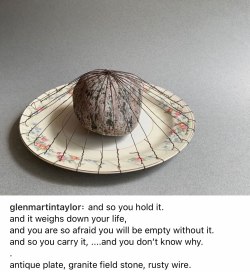 Today’s meditation was about fifteen minutes long and was not a guided meditation, nor did it include my piriformis stretching (which I did separately).  Instead it was a quiet meditation with breathing exercise, and an experiment with meditating with a large piece of garnet while focusing on the piece of artwork and writing by Glen Martin Taylor that is displayed to the right.

This piece and connected text really touched me deeply, as it speaks to me of my own personal struggles at the moment with letting go of the habits and methods that aren’t working for me in order to begin something better.  I’m struggling with letting go, even though I know I need to and even want to.

It speaks to me of the fear that I can’t quite articulate.  The fear that once I let go, nothing will fill the void and I will be left floating and untethered.

Today’s draw is the Ten of Wands, which is traditionally a representation of overwhelm and potential burnout. The card is an indication of being overworked or carrying too much burden and the need to redistribute responsibility to ease these issues.

I really like the colors in this Ten of Wands.  I’m not always all that excited about vibrant colors, but for some reason this particular color scheme really speaks to me of that approaching moment of burnout and the heavy weight that responsibilities can often impose upon us.

Combined with the affirmation card for today, what we see here is a reminder that there’s only so much we can do.  We can only go so far, take on so much, before we break.  And when we break? We’re no good to anyone, including ourselves.   Better to pace yourself, pick and choose your obligations, and make sure that there is time in your schedule to take care of yourself.  After all, if you don’t take care of yourself, you’ll soon no longer have the ability to take care of anyone else either.

#ConnectWithYourDeckChallenge by E Roebuck-Jones
Questions for June 12th thru 14th

What do I need to start?
Marshmallow (Water) and Cascara Sagrada (Metal)

What do I need to stop?
Marshmallow (Metal) and Parsley (Fire)

You have so much inspiration and enthusiasm for so many things that it can at time cause you to stew and spin rather than move forward.  Although standing still to find your bearings is good, there’s another step that you’ve been neglecting.  Make sure you’re picking and choosing your pursuits instead of trying to do everything at once. Too many interests at once can cause things to break down and fall apart.

What do I need to change?
Chaparral (Earth) and Yellow Dock (Wood)

I need to stop clinging to the things that are familiar just because they’re familiar.  If something is no longer serving me or is unhealthy for me, I need to make sure I’m letting it go instead of trying to hold on.  Without letting go of the stuff that doesn’t work, there’s no room for the stuff that will.  By holding back, I’m stirring up feelings of resentment that I’m then trying to ignore.  Stop ignoring the problem and start working on releasing those things and mentalities that I’m feeling such a desperate need to cling to.

#DiscordTarotolicsJun2021 Challenge Prompt
Topic: Do Spread #2
Question: Concerning her happiness and send of security, how is Miss Luna feeling these days? 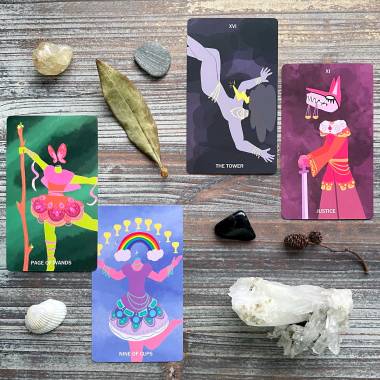 Reading Summary: The Tower and Justice are connected through darkness in color combinations and the way that the bodies tilt into each other. The Nine of Cups and Page of Wands connect through vibrancy and body language. Their opened armed stance for each figure, combined with both being in dance poses with one leg lifted.  Together, the dance poses combined with open arms depicts a sense of safety and freedom.

Take Away: She’s feeling engaged and very happy, satisfied and content (Page of Wands atop Ten of Cups). There’s a bit of stress and uncertainty going on with her right now because of the construction next-door (The Tower), but I’ve been able to mitigate that (Justice) a bit by making sure that the sliding glass door is closed when they are working and minimizing the disruption and noise within the condo as best I can.

I got some cuddle time with Gideon yesterday before bed and… I didn’t realize how tight I was until I was snuggled up and the knots started to relax.

These Saturday readings are (not usually) bearing in on any one thing or event in my life, as the question used is asking for a more general outlook. This is a self care exercise, and is not meant as a predictive reading… although that, too, happens on occasion.

The question is… What do I need to focus for self-care through the week ahead?

Earth – The Magician and Water · Flow – Take this week to get yourself back on track with your health and well-being.  There is absolutely nothing that has to be done this week.  Nothing at all. Use what’s at your disposal to set yourself back on a healthy path.  Get out in nature, take people with you along with the tools needed for your safety.  Do your meditation and allow it to sink you into a better, less jagged place.

Air – The Star and Rest – Let go of that negative headspace and put yourself in a mental space of rest and rejoicing.  You have the ability to be filled with hope and give yourself the joy and enjoyment that will allow you to truly rest and recover this week, but you’re going to have to actually spend some time in nature instead of just thinking about it.

Water – Justice, Radiate, Nurture – Again we see an encouragement to get out into nature and allow it to not just heal but nurture you.   Taking the steps needed to care for yourself this week will allow you to not just recover from the stress and abuse of working so much, but will allow you to find new energy and a better balance you’ve been seeking.  Treat yourself good, and you will feel good. Treat yourself badly, and you will reap the consequences of that.

Fire – Seven of Pentacles, Wisdom, Earth · Roots –  Annnnnnnd again we see an encouragement to get out into nature. Here, the guidance is to pour my enthusiasm into the long standing connection I have with the earth and the forest.  Take some time to visit the long standing older forest land you love so much, and do some deep rooting meditation while out there.  It can’t be always about the business and work… so give yourself some of what you really need right now.

Waning – Monkey – Flighty thoughts and juggling too much. Overthinking and too much multitasking.  It’s time to let go of the clouded scatter.  This is under your control to change.

Waxing – Crane – Make time to interject more spirituality and peace into your life.  Graceful elegance and the quiet calm that comes with it is important this week, as ins fostering your connection to the spiritual world and liminal spaces.

Take Away – This week’s reading is all about getting my ass out into nature and doing some wallowing and meditation.  it’s about setting to right my spiritual practices and self care. Heavy emphasis is put on my connection with nature, my gratitude practices, and meditation.  Sometimes rest isn’t about lying down and taking a nap.  Sometimes you can get more out of a trip into the trees than any number of naps.

It’s Your Path, Not Theirs