Today’s meditation was ten minutes long, and focused on vulnerability. Namely the fact that there is a certain amount of vulnerability involved in the exploration of trying new things and meeting new people.

I think that overall this is a good premise Letting yourself be open enough to seek out and explore new experiences is an essential part of life.

At the same time, what the meditation didn’t discuss was that when you open yourself up and give yourself some free reign to be vulnerable, it is very important to have clear and established boundaries in place to ensure you are being vulnerable in a safe way.

I think that this is a very important distinction to make, and one that was missing in today’s guided meditation.

Otherwise, I found the meditation to be relaxing and that my body really needed some extra stretching time this morning. 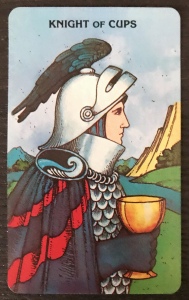 Today’s draw is the Knight of Cups. I have to admit that in general I don’t usually see this card as a positive one. In fact, in a deck like the Morgan Greer, the classic imagery lends itself to traditional reading of the card, which makes it Sven more difficult.

Usually when I see the Knight of Cups, I see emotional manipulation. I see the guy at the club that tells you what you want to hear to get what he wants, and justifies his behavior by arguing that the end result is mutually gratifying.

I used to use that argument too, because like this guy, I was a “mutually beneficial user” as well, I just didn’t use emotional manipulation to get there.

I know that is t the only interpretation of the Knight of Cups, but it is where I often go when traditional imagery is involved, simply because there’s not enough in the imagery to steer me in another direction.

So… the Knight of Cups… This card’s traditional meaning is that it is an active beta energy in the area if the emotions, relationships, creativity, and intuition. He is, in his more positive aspects, about creativity and imagination, as well as charm and romance.

The positive message for me in today’s card, I think, has more to do with his appearance than his meaning, though. He’s arrived today to encourage me to keep an open mind, and remember that sometimes things aren’t as they first appear.

A Sharp Mind Is A Horrible Thing To Waste

Transitioning from July to August