The prompt for this reading came from one of my Discord servers and is as follows:
“This year has been rough for us all, we’re just past the mid point fast approaching autumn.” 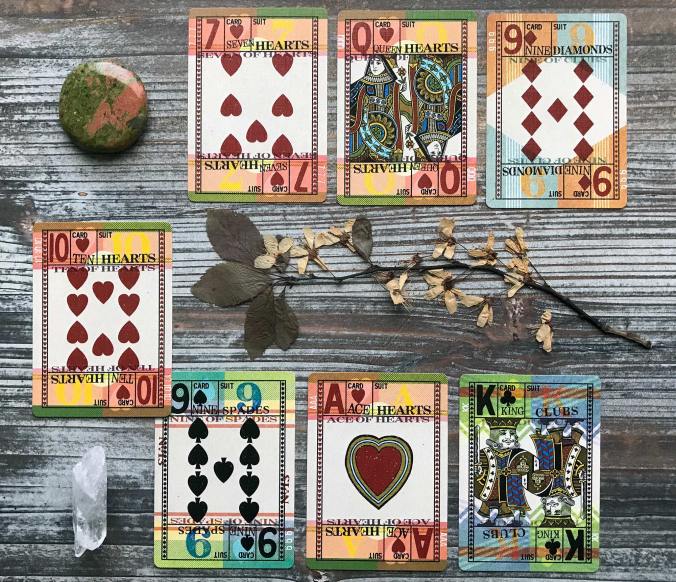 Making choices using the heart isn’t as detrimental to that structure an stability I constantly crave that I thought it would be. I can’t say that it’s something I’d want to practice all the time, but it’s okay to choose to be kind to myself instead of pushing all the time. It’s okay to listen to what my heart says I need to instead of constantly directing all decisions through either the head or intuition…. allowing the heart to have a say will not be the end of the world.

How will it aid you in the coming months?
Ten of Hearts atop Nine of Spades, Ace of Hearts, King of Clubs

I will be able to use the emotional fulfillment that allowing my heart have a say provides to combat the hoard of anxiety waiting for me as the holiday rush approaches and then crests to crash over me. The new growth I’ve managed this year emotionally will help to reinforce my drive and determination during that time of heavy pressure and stress.

Take Away – I’ve been avoiding my emotions for the majority of my life, boxing them up, caging them away, and burying them deep. Not just bad emotions, but the majority of my emotions. This year I’ve learned that allowing emotions out to breathe isn’t going to cause everything I’ve worked for to fall down around me. I may not be able to always identify what I’m feeling, but I was wrong about the catastrophic destruction they would inflict upon my life. The cards in the second half of this reading indicate that the emotional growth I’ve experienced this year will result in making me stronger under pressure when it counts the most.

Finding Light In the Darkness

The Benefits of Curiosity

Don’t Taste the Cherries… Savor Them